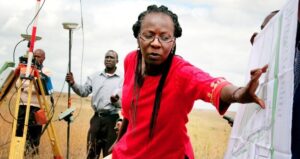 Catherine Adeya Acting CEO, Konza Technopolis Development Authority, Kenya. Photo©Diana Ngila/Nation Media Group[/caption] Still in the planning, Konza Technology City holds the promise of a silicon Valley for East Africa. The Africa Report talked to Dr Catherine Adeya, the woman at the tiller as it sets sail. The Kenyan government plans to create a ‘Silicon Savannah’ – an environment where technology companies, researchers and outsourcing firms can innovate and find solutions for African and global problems – and Konza Technology City is the centrepiece of that vision. Dr Catherine Adeya is the acting chief executive of the Konza Technopolis Development Authority (KTDA) and a driving force behind the government’s attempts to get infrastructure built and to attract investors. The KTDA operates under the authority of the information, communications and technology ministry, which is spearheading the development of the 2,000ha site located 60km south of Nairobi. The government is seeking to capitalise on Kenya’s fast-growing economy, its booming technology sector and an increasingly well-educated and tech-savvy workforce. According to Adeya, the job prospects alone are something for Kenyans to be optimistic about. “We estimate that there will be 16,675 jobs created in the next five to six years,” she says. “We also expect around 30,000 residents eventually to live here.” In 2012, the Kenyan government had international designers draw up a master plan. The KTDA is now translating this into a physical development plan, which it will then break down into smaller action plans so that construction can begin, says Adeya. Government funding In June, the KTDA signed a contract worth $25m with Tetra Tech, an American company that will oversee the first development phase. “In this current phase, there has been a lot of public funding. The Kenyan government is presently funding the basic infrastructure, but we would also like to see a certain amount of funding coming from public-private partnerships,” Adeya explains. She also says that one of the biggest challenges is convincing people just how much money is needed. The KTDA expects Konza City to cost KSh800bn ($9bn), with most of the money expected to come from the private sector. The project has its critics, too. Those opposing it say plans to build such a city will only serve the elite and exacerbate inequality. “Some of the criticisms so far have come from the way the project has been marketed,” she says. “But many mistakenly see Konza as a real-estate project. They must understand that it’s a project connected primarily to technology. And it’s about having the creative space to understand that technology. “I’ve also heard people saying things like: ‘Why are you spending this money on technology when there are people starving in Kenya?’ But that, I believe, is the old way of thinking about Africa. “What people don’t realise is that you can actually move forward and solve those problems by utilising the technology at your fingertips,” she adds. In 2008, the government of President Mwai Kibaki and Prime Minister Raila Odinga launched Vision 2030, a development programme that aims to transform Kenya into a prosperous middle-income country. One of its primary goals is to achieve annual gross domestic product growth of 10%. Konza is part of Vision 2030 and Adeya says that its success should encourage smart thinking about technology in Kenya and across the East African region. How long to build a city? But many people have been asking when the words will give way to bricks and mortar. “It’s a difficult question because it’s the equivalent of asking how long does it take to build London or Nairobi? There is no immediate answer,” Adeya says. “With the first 400 acres we should be able to do something in the next five years. It will eventually grow organically, but in terms of a full build-up, I would give it around 20 years. These are just estimates, of course, but we have a four-phase plan over the two decades.” President Kibaki broke ground at Konza in January 2013, but its development has been delayed by land demarcation and other problems. Without a firm time frame to reassure investors, some companies have turned to rival projects in other African countries. Nonetheless, Kenya’s Equity Bank announced in late May that it will build a data centre at Konza City. Adeya says that working for the information and communications ministry has given her a greater appreciation of the different ways of thinking between the public and private sectors. She explains: “I’ve only been in government about a year and a half. Before that, I worked in the private sector. But working in the government has helped me a lot with this project for Konza City. “I feel I’ve brought an injection of private sector thinking into the environment. In the private sector, people tend to want to get things done very quickly, but working in the Kenyan government I’ve realised that you have to be a bit patient. And I’m just still trying to understand some of the bureaucracy.” Having worked abroad and stud- ied in Britain and the US, Adeya describes Konza City as the perfect opportunity to entice Kenyans back to the country. “Many of the Kenyan diaspora want to come home. And the older they get, the more they want to be able to share some of the qualities that they have learned out in the West. But they need the right kind of jobs, and that is why Konza is so attractive to them.” Adeya says the project will create jobs for the East African region too. “I can see Konza creating jobs not only for Kenyans, but also for people from surrounding countries. “Because Konza is not just for Kenya, it’s also for people who want to have striking distance from home. “It’s so easy to commute from Kenya. It is right at the centre of Africa, and it has really good connectivity.” She remains an eternal optimist. “Konza City really is a field of dreams,” she says. “And like any field of dreams, if you build it, people will come.” ● *Source theafricareport]]>