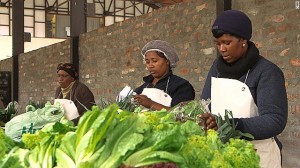 Urban farms have become a growing trend in Cape Town. People set up farms in parking lots, grow them out of toilets and even old TV sets.[/caption] Cape Town is being overrun by farms. They’re spilling out of parking lots, overtaking lawns, even growing out of old TV sets.

“You don’t need something fancy to grow in. We have some people grow in toilets and make worm farms in old baths,” says Louise Vaughan, the field area manager at Soil For Life, a non-profit that teaches gardening and nutrition to Capetonians.

The city is in the grips of a vegolution, and it’s thanks to the efforts of local food activists, hoping to use these urban farms as a means of battling not just hunger, but poverty as well. Some of Soil For Life’s students say the lessons have changed their lives for ever.

“I used to eat a lot of junk food. Now I’ve changed over. This morning, I had an omelet with things from the garden: spinach, Chinese cabbage, even the stinging nettle,” says Abdul, who set up his own garden after completing Soil For Life’s 12-week course.

Cavalleria Primary School, set in one of Cape Town’s more disadvantaged neighborhoods, also saw positive changes the lives of their students once they introduced their own food garden. 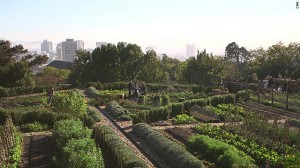 In the last few years, Cape Town has witnessed the proliferation of hundreds of community gardens and urban farms. Abalimi is one organization that has worked to link the city’s new micro-farmers with the types of middle-earners eager to fill their cupboards with local, organic produce.[/caption]

“Five years ago, our children had lots of white spots on their head. We had medical intervention. It was a sign of malnutrition,” recalls school principal Hurshele Carolissen.

“Since then, children have taken ownership of this garden. General health has improved, their weight has picked up because they are getting good nutrition. The classroom performance has improved,” he says.

In the last few years, Cape Town has witnessed the proliferation of hundreds of community gardens and urban farms. Abalimi is one organization that has worked to link the city’s new micro-farmers with the types of middle-earners eager to fill their cupboards with local, organic produce.

Rob Small, Abalimi’s co-founder, says that there are hundreds of community farms eager to join their network, though currently about 40 are members.

“There has been huge growth,” admits Small.

“I think people generally are feeling they want to do something, I think all of us are. We realize by buying something ethically, that gives us an enormous power to change the system.”