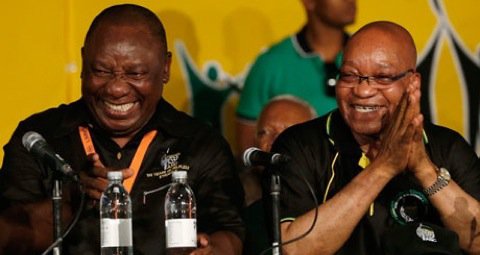 South Africa’s Deputy President Cyril Ramaphosa (L) and President Jacob Zuma (R). Photo©Reuters[/caption] South Africa’s Deputy President Cyril Ramaphosa is meeting several opposition parties on Tuesday in a bid to ease the tension in parliament following an eruption of chaos in the house last week. “Ramaphosa will meet with leaders of a number of political parties represented in parliament scheduled to take place on Tuesday 18 November 2014 at Tuynhuys in Cape Town,” spokesman Ronnie Mamoepa said in a statement. The meeting is expected to be heated with Opposition parties expressing their anger at Ramaphosa for the conduct of the ruling ANC and the parliamentary speaker, Baleka Mbete. Tempers flared over motions in parliament, with the ruling ANC legislators retaliating by objecting to several motions the opposition attempted to bring to delay tabling a report on the security upgrades to President Zuma’s Nkandla homestead. And for the first time in the country’s history, riot police were called in to remove an Economic Freedom Fighters (EFF) Member of Parliament. Several MP’s were injured during the fracas. Opposition parties also shouted down the National Assembly Speaker, Mbete when she tried to prevent them from bringing dozens of motions. Most of the motions were related to spending on so-called security upgrades at Zuma’s private homestead in KwaZulu-Natal, which Public Protector, Thuli Madonsela found the president to have unduly benefited from. The drama unfolded after the EFF’s Ngwanamakwetle Mashabela refused to leave the podium when she was ordered to do so by the house chairman. Mashabela called Zuma a thief during a debate on the Grand Inga Hydro Project in the Democratic Republic of Congo and refused to withdraw her remarks. Police arrived minutes later and a fracas erupted. MPs now say they will not attend sittings. The EFF is also heading to court to ensure the police do not enter the parliamentary precinct. * Source theafricareport]]>