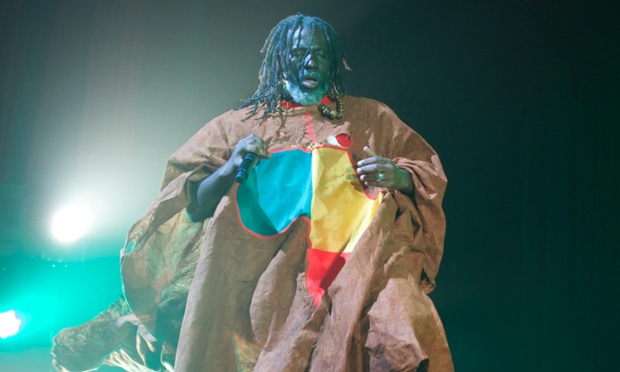 Tiken Jah Fakoly is part of a chorus of African singers offering an alternative to Band Aid 30. Photograph: Lionel Urman/Lionel Urman/Splash News/Corbis[/caption] After an outpouring of criticism for Bob Geldof’s response to Ebola, Twitter shows its support for a different charity single with a practical message Social media is rallying behind an alternative to Bob Geldof’s Band Aid 30, whichchampions advice and solidarity over scenes of desperation designed to tug at the heart and purse strings of the general public. Africa Stop Ebola was recorded before the release of Sir Bob’s third rehash of the charity single, and includes well-known African musicians such as Tiken Jah Fakoly from the Ivory Coast and Malian artists Amadou and Mariam, Salif Keita and Oumou Sangare. The #AfricaStopEbola hashtag is being used to share and discuss the alternative charity single, which has seen an increase in support since Band Aid 30 launched on Sunday.   https://www.youtube.com/watch?v=ruYQY6z3mV8     An African-focused blogger, A View from the Cave asked “what if #BandAid30 just threw its support behind #AfricaStopEbola”.The statement was backed up by Ugandan commentator TMS Ruge, who suggested that it should have been the first thing that they did. Twitter user @terez07 from Tanzania called BandAid30 “insufferable” and encouraged people to skip it. Although @imju_stevaquestioned whether it mattered where the money came from . The lyrics capture the collective sadness felt in countries most badly hit by the disease: “Africa is full of sadness, to see our families die … everyone is in danger … we must act”, attempts to tackle the broader issues around the disease and shares practical medical advice, like the verse sang by Fakoly:

The official YouTube video has been watched nearly 200,000 times and it is currently at number 78 on the iTunes download charts. BandAid 30 is at number one. All profits of Africa stop Ebola will go to Medecins Sans Frontiers/Doctors without Borders, who are working to treat the virus in the region. Africa Stop Ebola is a radical departure from Band Aid, whose tactic has been to scramble together the biggest pop stars in the world – from One Direction to Bono – and encourage the western public to dig deep with emotive lyrics. This year’s lyrics include “where a kiss of love can kill you/Where there’s death in every tear” instead of “where the only water flowing is the bitter sting of tears” – written to address theEthiopian famine in 1984. The public is then encouraged to “free”, “feed” and “help” the world and finally to “Let them know it’s Christmas time again”. Do the lyrics matter? Geldof has famously said: “I don’t care if you like it, just buy it”, with Band Aid 30 raising £1m within minutes of being screened on X Factor. But commentators have criticised the approach for perpetuating a 30-year-old narrative of Africa as a homogenous, desperate place. Questions have also been raised about the ethics of using dead or dying woman at the start of video. Writing for the Guardian yesterday, Ghana-raised afrobeat star Fuse ODG said he ducked out of Band Aid project after being “shocked and appalled” by the offensive lyrics. He argues that the narrative of poverty and famine is “extremely powerful psychologically”, and although people may get a “warm fuzzy feeling” by buying a charity single, they are much less likely to invest in the continent in the future. Fuse has coined the term This Is The New African, T.I.N.A for short, which he says is encouraging people to see the continent in a new light and empower those who live there in the process – he has also used it to help push his music into the global mainstream. * Source theguardian]]>