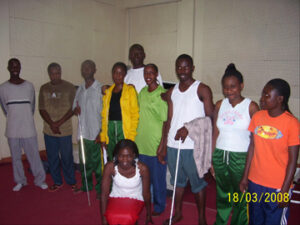 It is quite an illusion to avoid labeling a person with disability (PWDs). It is as simple as looking at a person and concluding they are handicapped since they are physically challenged. Mostly, when we meet with a pwd we unconsciously develop an inner attitude of empathy and rush helping them out. Even without their need of our help at times. It was a while last week when the students with disability (SWD) from the University of Nairobi met in a forum to express their issues to the relevant authorities within the main campus. During the forum, Solomon Odhiambo, a second year student at the School of Medicine expressed the need to sensitize the public about SWDs. “Since, I am partially impaired I have encountered many people who were very quick to help me even without me asking for this help,” said Odhiambo. “ For instance when I am filling a simple form someone will come and pick it from me even without enquiring if I need help, of course I know it is entirely goodwill but this such acts hurt our ego.” Expounded Odhiambo. Kelvin Kioko a student from UoN shares the same opinion saying that when a person succumbs to a disability they are taken to special schools where we are taught to be independent persons. We are treated as if we are normal so we adapt to it but the society still has withheld myths about us. “We heal from the trauma of being disabled but the society never heals.” Affirms Kioko. The forum spearheaded by Jamleck Njoka,a placement officer at the dean of students office, elicited diverse emotions from the students who turned up from different faculties offered by the institution. Approximately 30 students turned up for the meeting among the roughly 50 students who have been admitted in the University of Nairobi (UoN). Njoka addressed issues raised by the students through the kind dialogue that was facilitated by the leadership of the Students with Disability Association. Secretary General for students with disabilities of Students Organization of Nairobi University (SONU) David Mtai promoted the students to talk openly about their issues by assuring them they were the only ones who can make their felt needs known. “We are not only doing this for ourselves but also for the students who will join this university later. We will pride ourselves that we were part of the making,” assured Mtai. Students With Disabilities Association (SWIDA) secretary general, Michael Muigwa, outlined the issues as per the disability. He said that there was need for disability sensitization in all campuses. He added that the students who are visually impaired need their course outline scanned to make it easier for them during revision. He also held that the university should set up platforms such that during their registration they are not subjected to unnecessary torture of making long queues. However the students attributed their success to UoN. They emphasized that the institution didn’t kill their interests as compared to other institutions that limit the courses they should pursue. SWIDA acknowledged the University’s effort  with a ranking of 50 per cent in addressing the students with disabilities challenges. They mentioned the university offered students who are visually impaired with laptops and those with hearing disorder with hearing devices. They expressed their sincere gratitude for the university’s effort to accommodate them. They observed that the University of Nairobi has earned commendable recognition due to their excellent effort to practice the law that governs PWDs rights under the persons with disabilities act of 2003 by the National Council for Persons with Disabilities. The SWIDA Sports Representative, Benson Nderitu, supported his colleagues by adding that the university had plans underway to purchase equipments needed by the students during sports. Wilson Macharia a SWD said that the university means of transport for the SWDs will be ready for use in a short while as it was getting repaired then. Njoka guaranteed SWDs that after an official report was filed by their leadership he would present it to the dean of students to ensure that their felt needs were addressed. He said that it is true that there is slow progress but sure there all issues will be fully addressed in the future as the institution will also have improved on some of its services. He also commended the leadership of SWDs for their attempt to deliver to their fellow students. Later, in the afternoon session the students were joined by the representative of Disabilities Mainstreaming Committee (DMC), Susan Oluoch, which deals with the SWDs needs and representation in the institution. She engaged with the students and emphasized on the need for them to register with the committee as part of the SWDs as students were shying away from them. She said that the committee would collaborate with the National Council for Persons with Disabilities through the institution to get financial aid that should cater for their fees and other needs. She said the collaboration will enable the institution to fully adhere to sub article 18, part two of the rights and privilege of persons with disabilities by the council (PWDs Act 2003). In attendance of the forum were the students’ representatives from the School of Arts and Social Sciences. They also emphasized that the students should improve their interactions with the institutions through them as they reassured them of their full commitment to helping the SWDs to overcome all their challenges. I must agree that the forum was very informative and educative forum since I met with many SWDs who are independent. In fact they need minimum or no assistance while interacting with the environment provided it is conducive. So may be its time that we let them live life as we live it. Free from unwarranted assumptions and discrimination but help when need be.    ]]>