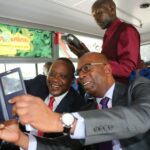 The President of Kenya today took a matatu ride and by the look of things enjoyed it immensely. Uhuru Kenyatta attended the launch of cashless payment system for public service vehicles which took place at KICC. The launch which happened during the Matatu Owners Association National Delegates Council Meeting also saw the unveiling of Safaricom’s My1963 Card. This is the card that Uhuru used in his bus ride from State House to KICC. In his speech, Uhuru Kenyatta acknowledged that the PSV sector is a major contributor to the country’s GDP and is too critical to be left to uncoordinated and chaotic leadership. The President lauded SACCOs for ushering in a bold new era of cashless fare payment systems. “These systems,” he continued, “are revolutionary because they give proper control to investors. They also bring convenience, security and accountability all at once.” The graffiti on matatus was welcomed by Uhuru Kenyatta who also said that training of drivers and conductors will be done in partnership with NYS. During his matatu ride, he was accompanied by Safaricom CEO, Bob Collymore and Transport and Infrastructure Cabinet Secretary, Michael Kamau.]]>