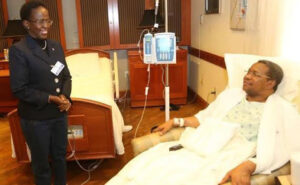 President Jakaya Kikwete chats with Tanzania’s ambassador to the US Liberata Mulamula who paid him a visit at the Johns Hopkins Hospital after surgery Sunday. [PHOTO: STATE HOUSE, DAR ES SALAAM][/caption]DAR ES SALAAM: Tanzania’s President Jakaya Kikwete underwent a successful prostate surgery at the Johns Hopkins Hospital in Maryland, US over the weekend, the president’s office said. Kikwete, 64, has led Tanzania, east Africa’s second-biggest economy since 2005 but must step down next year at the end of his second and final term in office. The operation was performed on Saturday, his office said on Sunday, without giving details on the nature of the surgery. “The surgery which lasted for one and a half hours, was highly successful. The president’s condition is improving, but he is still in a hospital ward under medical supervision and receiving treatment,” said in a statement released in Kiswahili language on the presidecy’s official website. The president’s office said in a previous statement on November 6 that Kikwete would spend 10 days in the US for a medical check up. Tanzania plans to hold presidential and parliamentary elections in October 2015, which will be preceded by a referendum on a new constitution in April. *Source standardmedia]]>