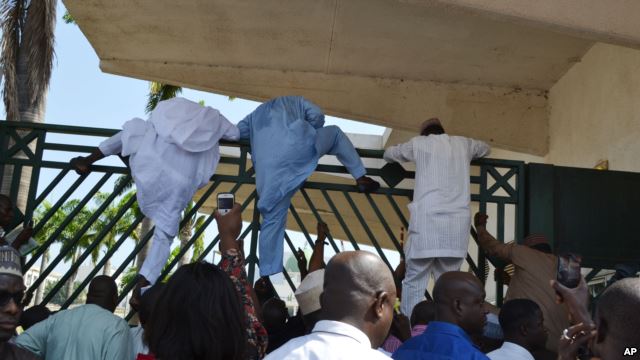 Unidentified lawmakers scale the parliament gate, in Abuja, Nigeria. Nov. 20, 2014.[/caption] Less than three months before the February presidential polls, tensions are ramping up in Nigeria, as the showdown outside parliament Thursday between lawmakers and police made clear. Television footage showed lawmakers climbing the gates of the National Assembly in Abuja as police tried to keep them out. Security forces eventually fired tear gas as parliamentarians made their way inside the complex. Civil society members and voters in the southern Delta State, a stronghold of President Goodluck Jonathan, are worried about what the skirmish could mean for next year’s presidential election. Jibrin Ibrahim, director of the Abuja-based Center for Democracy and Development, said he feared the decision by police not to grant Speaker Aminu Tambuwal access to the House of Representatives on Thursday showed that security forces were playing politics. Party switch Tambuwal recently defected from the ruling Peoples Democratic Party to the opposition All Progressives Congress, infuriating ruling party members, who have spoken of sacking him as speaker. “When the security forces are not neutral and nonpartisan in their actions, then it poses serious doubts on the consolidation of democracy,” Ibrahim said. Many states in the southern, oil-producing Niger Delta are strongholds of the PDP. Jonathan is a former governor of Bayelsa State, in the Delta. The PDP on Friday called for an investigation into the parliament scuffle. But Onakpoma Ovie Joseph, a PDP organizer in Delta State, where Jonathan won over 98 percent of the vote in the 2011 presidential polls, said the episode could make voters believe the security forces are out of control, and cut into the party’s support. “Well, I’m standing against what the government has practiced, and it’s going to turn on them, [like] 2011,” Joseph said. The APC was formed last year as a merger of four of the country’s largest opposition parties. But while the PDP has united behind Jonathan in his support for a second term, the APC has yet to choose its candidate. Damaging to image Gabriel Osakene voted for Jonathan in the last presidential election in part because he is from the Niger Delta. Now, he doesn’t know whom he’s going to support, and he says episodes like the one at parliament hurt the president’s image. “This is going to be a challenge come 2015. …  Everybody is now saying on a daily basis that the president is not competent,” Osakene said. Parliamentarians at Thursday’s session were to have voted on Jonathan’s request to extend a state of emergency in three northern states because of the Boko Haram insurgency. But because of the chaos at parliament, both the House and Senate adjourned, with House lawmakers deciding that the president’s pre-existing powers authorized him to continue using military power against the group. Meanwhile, Boko Haram on Wednesday killed 45 people in Azaya Kura, a village in Borno State. The state is one of the three under emergency rule. *Source VOA]]>