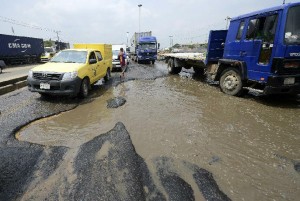 Lagos (AFP) – The dismal state of Nigeria’s roads is a constant source of exasperation for the long-suffering population but a tongue-in-cheek campaign on social media is trying to shame the authorities into action.

Posting under the hashtag #MyRoadIsWorseThanYours, Nigerians have been sharing examples of the country’s worst highways.

Bomb crater-sized potholes, roads resembling muddy rivers in the annual rainy season and some unrecognisable even as public thoroughfares have been posted online.

“Here’s one Lagos road (state governor Babatunde) Fashola needs to repair fast,” says one tweet, with a picture of a motorcyclist navigating a flooded road, with water nearly up to his saddle.

The tweets have an underlying seriousness: when Africa’s leading economy and oil producer claims to have pumped 1.4 trillion naira ($8.5 billion, 6.75 billion euros) into infrastructure improvements since 1999, why are the roads so bad?

They have also helped balance out the pages of self-congratulatory newspaper advertisements taken out by state governments, proudly displaying the smooth tarmac of upgraded, traffic-free roads.

– Deaths, strikes, responsibility – Olanrewaju Adenekan is a clearing agent at Lagos’ main port of Apapa. He is 51 but looks two decades older and is in poor health. Both he and his doctor blame it on his daily commute.

Adenakan leaves his house in Sango-Ota, north of Lagos, before 4:30 am every day to reach Apapa at around 9:00 am. The distance door-to-door is just 37 kilometres (23 miles).

“The traffic situation is bad. I spend between four and five hours for a journey that should take less than one hour,” he told AFP.

Adenekan owns two cars but prefers to take public transport because it is cheaper — and also because the badly maintained roads take a debilitating toll on his vehicles.

“Nigerians spend a lot of money on maintaining their vehicles because of potholes, which damage tyres, wheel rims, shock absorbers and other components,” said quantity surveyor Alani Amusa. 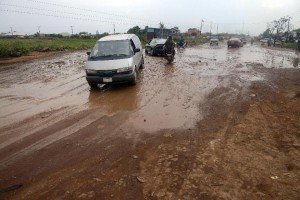 Time spent in traffic jams is also dead time, robbing businesses of productivity and effective workers. When they eventually arrive, they are often exhausted.

Motorists stuck for hours in jams are sitting ducks for armed robbers.

And bad roads mean more accidents. Nigeria had the highest road fatality rates in Africa in 2010 at 33.7 deaths per 100,000, the World Health Organization said in a report published last year.

Recently, petrol tanker drivers threatened to go on strike if the bad roads were not fixed, blaming potholes and gullies for causing accidents.

Nigerian states and the federal authorities have been in dispute about who is responsible for maintaining and improving the roads — meaning nothing gets done.

The Lagos State government for example has been at loggerheads with Abuja over reimbursements for repairs to federal-owned roads dating back to when Lagos was the country’s capital.

As in so many walks of Nigerian life, corruption is also part of the problem.

“Contractors like to cut corners by not working to specification,” said Amusa, who is involved in a number of road projects in Lagos state.

“They connive with corrupt officials to use sub-standard materials in order to maximise their profits.

Eight years later, the cost has increased nearly three-fold to 347 billion naira — and the road is not yet finished. [caption id="attachment_13855" align="alignleft" width="300"] 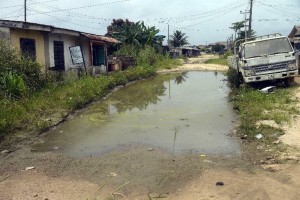 Waterlogged Ibafo Community School road is seen being abandoned by motorists, in Ogun State, southwest Nigeria, on October 23, 2014 (AFP Photo/Pius Utomi Ekpei)[/caption] Questions have been asked too about the cost of reconstruction of the 127.8-kilometre Lagos-Ibadan expressway — the busiest road in west Africa, carrying an average of 250,000 vehicles per day.

The contract was awarded for 167.9 billion naira but some experts believe it could have been revamped for a lot less.

Most people, though, just want their own muddy, potholed streets paved and well-maintained to make the journey from their front doors to the main road less of a bone-shaking obstacle course.

Works Minister Mike Onolememen blamed chronic under-funding from the federal government, which has led to contractors revising up their project costs to accommodate rising prices of materials.

“About 500 billion naira was needed every year for the next four years to pave bad roads,” he said. So far, he said the treasury has released just a quarter of the sum for the coming year.