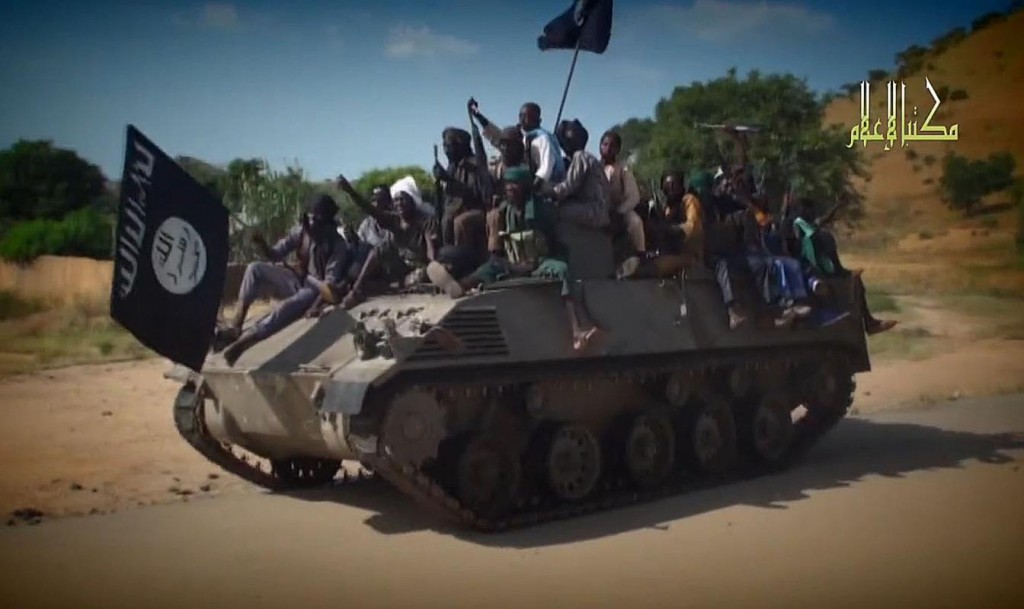 A screengrab taken on November 9, 2014 from a video released by Nigerian Islamist extremist group Boko Haram fighters parading on a tank in an unidentified town (AFP Photo/)[/caption]

“The PDP (Peoples Democratic Party) is sacrificing the lives of our brothers, of our sisters, of our children for very selfish political ends,” said the All Progressives Congress national chairman, John Oyegun.

Oyegun questioned why the military — West Africa’s largest — had failed to stop the Islamist insurgency and claimed it was because the three worst-affected states were all APC strongholds.

“They (the PDP) have allowed the insurgents to take over substantially controlled APC states,” he told the rally in the capital, Abuja.

The PDP has never been out of power in Nigeria since the country returned to civilian rule in 1999 and is widely expected to win the next election, which takes place in February next year.

But the opposition has been seen as stronger than ever after dozens of PDP state governors and lawmakers defected last year in opposition to Jonathan’s bid for re-election.

Party officials have already raised fears about the integrity of the election result if the violence in the affected states prevents people from voting.

Jonathan on Tuesday asked parliament for a further six-month extension of emergency rule in northeastern states of Yobe, Borno and Adamawa to help end the violence.

More than 13,000 people have been killed since the insurgency began in 2009 and Boko Haram is now said to be in control of more than two dozen towns in its quest for a hardline Islamic state.

Opposition lawmakers in the upper chamber of parliament said the special powers, first introduced in May 2013, had been an outright failure, as bloodshed had increased and towns had been lost.

Oyegun and presidential candidate Muhammadu Buhari, a former military ruler, both denounced what they claimed was the ruling party’s corrupt and inept leadership.

After “16 wasted years”, the economy was in a “state of free-fall” and still overly reliant on oil but a recent fall in global prices risked hitting ordinary citizens hard, Oyegun added.