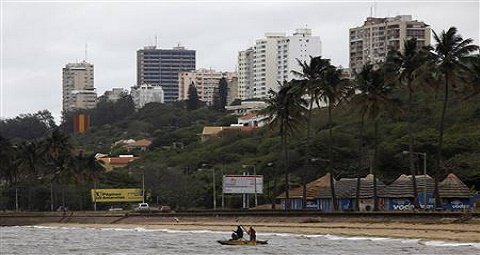 Countries across Asia are quietly reaching deals to import liquefied natural gas (LNG) from Mozambique, which could transform its economy and give it a front-row seat in tapping rising global gas demand.   The unannounced agreements, five in total, show how war-scarred Mozambique is elbowing past rivals from the United States to Australia by offering flexible contract terms on 20-year deals. U.S. oil major Anadarko Petroleum is building the first two of up to 10 plants in Mozambique to liquefy gas for export. Preliminary deals have been reached to sell its LNG to China National Offshore Oil Corp, Japan, Indonesia’s state-run Pertamina, the United Arab Emirates, Thailand’s PTT and companies in India, according to company and industry sources close to the talks. If all goes as planned, Africa-focused Standard Bank expects an LNG windfall to swell the state purse of the former Portuguese colony, one of the world’s least-developed nations. “The LNG cost base and pricing from our Mozambique project is competitive in today’s LNG market, which is supported by the willingness of our partners to invest more than $3 bn to date in this world-class development,” Steve Hoyle, Anadarko’s vice-president for LNG who is leading the project, said. Global LNG demand is expected to double by around 2035. But prices that LNG projects can charge for long-term supply are falling from historic highs as new producers crowd the market and oil prices plunge, weeding out weaker contenders. Delays pose problems Delays pose one of the biggest risks to Anadarko’s plans, given the project has an extremely narrow window to lock in premium buyers before a surge of new supply post-2021 leaves only lower tier importers. In an industry dominated by oil-linked pricing of LNG, Anadarko is attracting clients by offering to price the fuel based on a mix of benchmarks including crude oil and U.S. gas prices, the lowest in the world due to the shale boom, according to industry sources. Chinese energy companies, already emerging as one of the biggest beneficiaries of new LNG exports from the United States, may also steal the show in Mozambique. Last year CNPC paid $4.2 billion for a 20 percent stake in Eni’s Area 4 LNG export venture in Mozambique to feed the world’s fastest growing gas consuming country. Now China’s National Offshore Oil Corp., or CNOOC, is set to lift a comparable volume of 2-2.5 million tonnes a year from Anadarko’s neighbouring site in Area 1, three sources with knowledge of the matter said. “The terms of the CNOOC deal were ironed out some time ago, and it has just been parked waiting for the project to take a final investment decision,” an Area 1 project source said. Thailand’s PTT, a partner in the Area 1 venture, has agreed to take comparable volumes to China’s CNOOC, a source with knowledge of the matter said. Indonesia’s Pertamina, facing falling domestic gas output and rising demand, has agreed to take 1 mtpa of LNG, two sources with knowledge of the matter said. The project is trying to market some supply to a consortium of small-scale Japanese buyers, which may want to take a stake, and is in advanced talks with an Indian company, the sources said. While Mozambique finds buyers, regional rival Tanzania is lagging as political paralysis bogs down energy legislation and delays investment decisions by project developers BG Group and Statoil, a recent Eurasia Group note said. For the Mozambique LNG project to be developed, the government must set up a fiscal and legal framework to smooth the inflow of investments, for which parliament has set a year-end deadline. *Source Reuters/theafricareport]]>