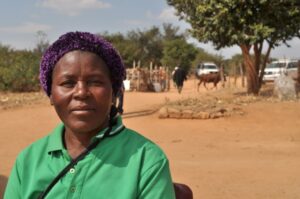 Bellah Mabhungo
Jessica Hartl, USAID[/caption] Such a simple statement from Bellah Mabhungo, 57, from Mabhungo village in Zimbabwe said it all. For her and others in the village, the hunger season had come a little earlier than expected in 2013. Harvests had been poor in Mabhungo and neighboring villages, which meant higher food prices in the markets, a double hit for families like Mabhungo’s and Mable Siwenge’s. More than 2 million people in Zimbabwe were in need of food assistance at the peak of the hunger season in March 2014. That’s where the seasonal targeted food assistance by the U.N. World Food Program (WFP) began to help. “With the assistance, we managed to survive until harvest time in March [2014],” said Siwenge, 50. She was a first-time recipient of food assistance this year, as her land did not produce well with the local maize and groundnut seeds she used. The seasonal assistance was provided from October 2013 to March 2014. About one-third to one-half of the 168 families in the village had received this food assistance in previous years. But this year, USAID, in partnership with WFP, tried a different approach to assistance in this and other villages in Gweru and Gokwe South districts—mobile money and food instead of just food. WFP provided cash transfers in Gweru and Gokwe South because enough food was locally available to support direct purchases by beneficiaries. The intervention would not work in other districts because of inadequate food supplies. Partnering with EcoNet, one of the largest mobile phone companies in Zimbabwe, and its subsidiary, Steward Bank, WFP piloted the first mobile money-based food assistance in Zimbabwe. With 92 percent cell phone coverage in the country, distributing food assistance in the form of mobile money made sense. For individuals who did not have their own phone, they typically did have an SIM card—the data storage card in a mobile phone—and could use a neighbor’s or friend’s phone with their own SIM card to access their mobile money. Several days prior to the food distribution of vegetable oil and beans, more than 17,300 beneficiaries in Gweru and Gokwe South districts received an SMS text message indicating that $4 for each person in their household was now in their e-wallet. Beneficiaries could then immediately go to the nearest EcoCash agent—an agent for EcoNet—to get the actual cash in hand. For Siwenge, it took her about 40 minutes on foot to get to the nearest EcoCash agent. Beneficiaries such as Siwenge saw a distinct advantage to getting mobile money—she managed the money for her seven-member household ($28 per month) and could take it out of her e-wallet little by little, so it was less likely to be diverted for things such as school fees, non-food items or loans to family members. With her cash, she bought grains for her family and had them milled. Mabhungo agreed with Siwenge. Before receiving the assistance, her family of three limited their portion sizes to make sure the food lasted. After the program began, she said, “We never slept without having consumed anything.” Both women preferred a combination of mobile money and food instead of only one intervention. They felt they budgeted better for their families with only part of their food coming in the form of cash, but also felt it gave them control over what food their families ate. Families in need weren’t the only ones to benefit. Rural markets were stimulated because families now had the cash to purchase grains, and EcoCash agents in Gweru and Gokwe South districts also saw an increase in their business. Nyasha Muzila, an EcoCash agent at Muzila Store near Mabhungo, affirmed this increase in business during the two months of the mobile money program. While she also indicated her EcoCash transactions and sales from her store went back to normal levels at the end of the program, she and her family felt it opened up new opportunities for them to reach rural communities with other mobile banking options. In preparation for the next hunger season, USAID, WFP, EcoNet and Steward Bank plan to take the lessons learned from the pilot—for example, ensuring accurate mobile phone numbers for beneficiaries and liquidity for EcoCash agents—to improve and expand the program. USAID has supported WFP’s seasonal targeted food assistance for a number years to help fill the food gap during the hunger season. In fiscal years 2013 and 2014, USAID’s contributions totalled $45 million in the form of U.S. and regionally purchased commodities as well as cash resources for the mobile banking pilot and its predecessor, Cash for Cereals. *Source USAID]]>