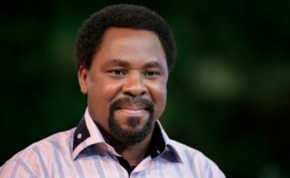 Photo: Leadership
T.B. Joshua[/caption] Nigeria’s touted Prophet TB Joshua of the Synagogue Church of All Nations (SCOAN) has controversially prophesied of death of another Southern African leader. This comes at a time when he was quoted to have prophesied the death of Zambian President Michael Sata. A report carried by Zimeye revealed that, an official TB Joshua journalist who quoted from the Prophet of the prophecy. The full article reads. “Following the death of President Michael Sata last month, the ruling Patriotic Front has reportedly been engulfed in a succession wrangle, a development that appears to lend some credence to a prophecy made early this year by controversial Nigerian clergyman Prophet TB Joshua.

On February 9 this year, the Nigerian cleric spoke in a church service broadcast live via popular Christian television station Emmanuel TV that there would be succession disputes in two Southern African nations due to illness and death of sitting presidents. He however never mentioned the names of those countries. “Two of the nations there (Southern Africa) will face a leadership tussle because of sicknesses and disease,” the clergyman told his fully packed church based in Lagos. Further, Joshua warned leaders in general to desist from playing politics when it comes to the things of God, stressing the repercussions were severe. “When it comes to religion and Christianity – don’t play politics. You can’t play politics with God unless you want to destroy yourself. Politics is a game but there is a limit.” Although Prophet TB Joshua’s Synagogue Church of All Nations (SCOAN) is yet to confirm if the prophecy in question was refereeing to Zambia, some Zambians think the prophecy was directed at Zambia and its neighbouring countries.” TB Joshua has over years been making headlines having had his prophecy of a South African President to die come to pass of Malawi leader Bingu wa Mutharika in 2012. *Source Allafrica]]>