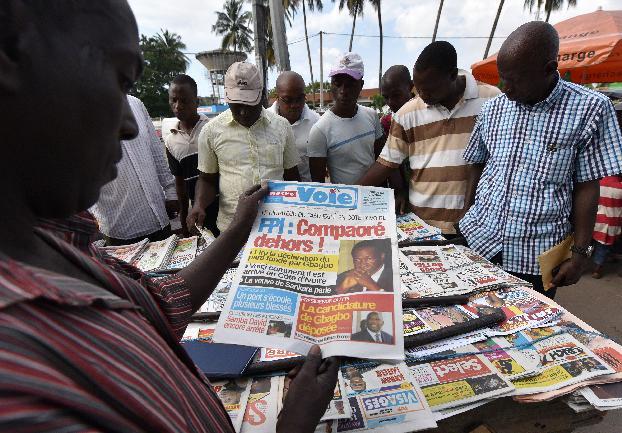 A man looks at a newspaper bearing headlines on the situation in Burkina Faso and reading ”Compaore out!” on November 3, 2014 in Abidjan (AFP Photo/Sia Kambou)[/caption] Yamoussoukro (Côte d’Ivoire) (AFP) – Burkina Faso’s ousted strongman Blaise Compaore may have been granted a luxury haven in Ivory Coast, but on the streets of Yamoussoukro few cheer for a man some blame for a decade of strife in their own country.

At the “Villa des Hotes”, the government mansion where the president took shelter Friday from the storm rocking his country, the clipped lawns are flawless and the wrought-iron gates firmly locked.

Compaore, his wife Chantal and their entourage were spotted rolling towards the flat-roofed villa in a 27-car convoy — one for each of the 27 years he held onto power until popular anger forced him out last week.

Since then, not a peep has emerged from the walled 1970s complex used as a semi-official residence for visiting dignitaries by Ivory Coast’s government.

As the tug-of-war began between army brass keen to fill the power vacuum and a political opposition bent on preventing a military takeover, Compaore and his wife headed for the border after finding they were no longer wanted at home.

Chased out over one bid too many to extend the head of state’s term in office, the presidential couple left Ouagadougou Friday around noon, as a statement announced his resignation following a day of violence that saw parliament set ablaze.

Their convoy was seen heading for the southern Burkinabe garrison town of Po, home to a key army training centre.

But the residents of Po had other plans — announcing they would barricade the streets rather than welcome the loathed ex-leader.

“So he never came,” one of them told AFP.

Presumably warned of the hostile reception awaiting it, the convoy circled around the town and headed off to a destination unknown.

Compaore was later said to have crossed the border into Ghana, a report denied by Accra. Others suggested he might be in Togo.

But the convoy finally trundled into Ivory Coast late on Friday night.

The following morning, an employee of Yamoussoukro’s Hotel President, another luxury complex, told the media he had served up breakfast to the Burkinabe ex-leader and his wife.

The Ivorian government later confirmed it had taken in the couple, housed in the guest villa dubbed the “Giscardium” after it was inaugurated by France’s onetime president Valery Giscard d’Estaing.

Barring a few local journalists scouting for news, few Ivorians have ventured close to the mansion, set among the vast, quiet avenues of the administrative capital.

Questioned on the street, residents were divided on their government’s decision to offer shelter to the strongman, who took power in a coup that killed his former comrade-in-arms Thomas Sankara.

Compaore became a key mediator during a decade of strife in Ivory Coast, as the country split into a south loyal to president Laurent Gbagbo and a rebel-held north backing Alassane Ouattara, the current president.

Now behind bars at the International Criminal Court, Gbagbo was ousted in 2011 after months of deadly unrest sparked by his refusal to recognise Ouattara’s election victory the previous year.

“When we were in crisis, our brothers found shelter in Burkina,” said Lassina Fofana, a 32-year-old engineer. “He is welcome in Ivory Coast.”

“Blaise was a mediator,” agreed Yacouba Bakayoko, pointing out a 2007 peace accord brokered in Ouagadougou. “He didn’t send mercenaries into Ivory Coast.”

But others see Compaore as a troublemaker who fomented the uprising that split their country in two, a view widely held among supporters of the toppled president Gbagbo.

“He was the godfather of the rebellion in Ivory Coast,” charged one 60-year-old resident, who gave his name as Banhy. “So if his skin needs saving today — well let him stay at home, or go somewhere else!”

The seeds of Ivory Coast’s rebellion were sown when Ouattara was barred from running for election on the nationalistic grounds that his family roots were in Burkina Faso.

“We don’t want any trouble in Ivory Coast,” Banhy said. “We just got out of one post-electoral crisis. We don’t want it to happen again.”