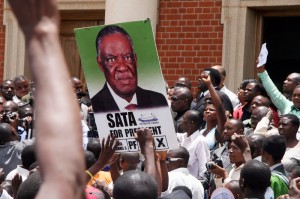 Zambia’s Supreme Court reserves ruling in presidential petition case, February 17, 2009, photo by Harrison Tuntu. Lusaka, Zambia. Demotix.[/caption] Left in the dark about their leader’s illness, Zambians were angry more than shocked to learn this week that the country’s fifth president, Michael Sata, fondly known as King Cobra, died in London on October 28. The government only recently acknowledged that the president was sick, waiting until October 20, four days before Zambia’s 50th Independence Day, when Sata needed to be evacuated to Britain for emergency medical treatment. At the time, the presidential palace stated simply:

His Excellency, Mr. Michael Chilufya Sata, President of the Republic of Zambia, last night left for a medical check- up abroad […] First Lady Dr Christine Kaseba, some family members and his press aide have accompanied the Head of State.

This wasn’t the president’s first trip abroad to meet with foreign doctors, but it was the first time state officials admitted to Sata’s medical needs. In the past, his administration has denied rumors by cabinet members about his declining health, maintaining that Sata was fine and busy at work. Earlier this year, the government told journalists that Sata spent a working holiday in Israel, though the Israeli media later reported that he was there to receive medical treatment. The Zambian government’s curious public relations hasn’t gone unnoticed on social media. On Facebook, B.M. Jermaine Sikombe reproduced the presidential palace’s vague statement announcing Sata’s passing. Sikombe scoffed at the wording, calling on officials to take responsibility for leaving the public woefully misinformed.

AS YOU ARE AWARE, HIS EXCELLENCY MR. MICHAEL CHILUFYA SATA, PRESIDENT OF THE REPUBLIC OF ZAMBIA HAS BEEN RECEIVING MEDICAL ATTENTION IN LONDON, IN THE UNITED KINGDOM HE LEFT ZAMBIA WITH THE FIRST LADY AND OTHER CLOSE MEMBERS OF THE FAMILY ON OCTOBER 20, 2014. HOWEVER, IT IS WITH A VERY HEAVY HEART THAT I ADDRESSYOU TODAY, TO INFORM THE NATION THAT OUR BELOVED PRESIDENT AND LEADER, HIS EXCELLENCY, MR MICHAEL CHILUFYA SATA HAS PASSED ON.

And then some one must without any emotions at all in an uncoordinated announcement start the statement …… as “AS YOU ARE AWARE, HIS EXCELLENCY MR. MICHAEL CHILUFYA SATA,…..”. what did we know who told us he was London — can we henceforth stop this nonsense?

When Zambians were confronted with sad pictures of a frail and clearly unwell President in April 2014, which immediately evoked feelings of concern and anxiety, government officials played down the concerns. Minister of Foreign Affairs Harry Kalaba regularly issued ridiculous statements to Radio Phoenix such as “the Opposition leaders questioning the health of President Sata are malicious”. “Sata will outlive his enemies that wish him dead”, President Sata is enjoying the best of his health”. Of concern was the manner President Sata was carted around to; South Africa, India, United Kingdom and Israel in a secretive and hushed manner. Recently the nation held with bated breath when President Sata opened the fourth session of Parliament on September 19th 2014. He looked seriously unwell.

Sata disappeared from the public eye last June, after he met a delegation of senior Chinese officials. He briefly reappeared at the official opening of the 2014-2015 parliamentary session, where he failed to read his prepared speech. He later traveled to New York to appear before the United Nations General Assembly, but he missedhis allotted time slot to deliver his speech. Zambian officials’s public statements were equally misleading about the health of Levy Mwanawasa, the country’s third president, who died in-office from a stroke in 2008. While Mwanawasa was in a hospital bed, his vice president, Lupando Mwape, famously told the media that the president was jogging in London. In June 2008, President Mwanawasa collapsed at a meeting of the African Union in Egypt. He was rushed to France, where he died several weeks later. *Source globalvoices]]>