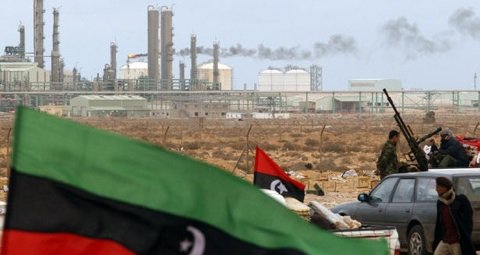 FILE PHOTO©REUTERS[/caption] Libyan oil production is set to tumble to just 200 000 barrels per day from 800,000 barrels following an attack on an oil field. Post Muammar Gaddafi Libya has been riddled with conflicts between rebel and militant groups fighting over ethnicity, ideology and oil control. The fight over oil control is critical to the resolution of Libya’s post-revolution troubles. Libya’s transitional government has tried to keep oil production insulated from the spreading chaos in the country, where two prime ministers, parliaments and army chiefs of staff compete for control. But protests and militia blockades have hampered the country’s economy, peace negotiations, and rule of law. On Wednesday the country’s major oilfield, El Sharara was shut down after militants attacked and seized the field. At maximum capacity, El Sharara produces about 340,000 barrels per day. The facility is operated by Libya’s state oil company and Spain’s Repsol. According to reports, some workers have been trapped inside company buildings since the beginning of the attacks. Libya’s oil industry produced about 1.4 million barrels per day in July 2013. At this rate, Libyan crude oil production was expected to help drive down global gas prices. But, the growing political instability in the country has increased uncertainty in global markets. The country’s levels of production and supply has been pegged back by the shutting down of El Sharara oil fields. Experts say Libya is heading towards civil war as the transitional government has been unable to control former rebels who helped oust Gaddafi in 2011. Despite the government’s inability to curtail militants fighting to grab power and a share of oil revenues, the country’s oil facilities remain under government control. *Source theafricareport]]>