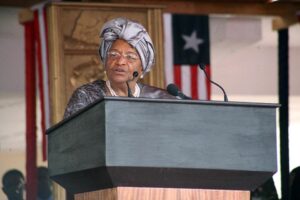 Liberian President Ellen Johnson Sirleaf says she will not seek an extension of the state of emergency (AFP Photo/)[/caption] Monrovia (AFP) – Liberia lifted its state of emergency Thursday, announcing huge gains in the fight against Ebola as Africa pinned its hopes on trials for a “miracle drug” to be tested on patients in Guinea.

The end of a raft of tough restrictions — the clearest sign yet that authorities in Monrovia believe they are beating the epidemic — follows a dramatic recent drop in new cases.

“I have informed the leadership of the national legislature that I will not seek an extension of the state of emergency,” President Ellen Johnson Sirleaf announced on state-owned radio network ELBC.

Sirleaf declared the emergency regime on August 6, speaking of “a clear and present danger” from Ebola, which at the time had claimed around 1,000 lives across west Africa.

She said the relaxation was “not because the fight against Ebola is over” but because recent successes in battling the epidemic had combined “to reposition our efforts to sustain our fight against the virus”.

Official figures show Ebola has claimed more than 5,100 lives across west Africa — 2,836 of them in hardest-hit Liberia — with the real death toll thought to be up to three times higher.

But the Liberian government said this week new cases had dropped from a daily peak of more than 500 to around 50, confirming tentative announcements by experts worldwide of an apparent slowdown.

Aid agency Doctors Without Borders, known by its French abbreviation MSF, said researchers would test a promising antiviral drug and transfusions of survivors’ blood in the first ever clinical trials on people with the virus.

The tests in two of its treatment centres in Guinea — due to begin next month — are aimed at rushing out an emergency therapy, with results expected as early as February.

Ebola, transmitted through bodily fluids, leads to haemorrhagic fever and — in an estimated 70 percent of cases in the current outbreak — death. 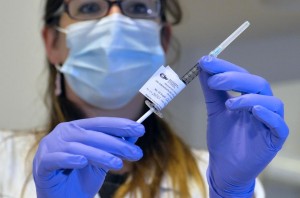 A doctor holds a syringe containing the Ebola vaccine called ChAd3 during medical trials at the CHUV hospital in Lausanne, on November 4, 2014 (AFP Photo/Richard Juilliart)[/caption]

There is no specific treatment regime and, as yet, no licensed vaccine — although possible candidates are being tested in Mali and elsewhere.

The antiviral has been shown to work on other viruses, but not Ebola, said Annick Antierens, who is coordinating the trials for the medical charity.

She said there could be “an intermediary result, whereby it’s promising and we’re not sure if it will be efficient for every patient”.

Ebola, which emerged in the Democratic Republic of Congo in 1976, is one of the most aggressive pathogens known to humankind, and victims tend to die a few days after showing symptoms.

The target for a successful trial in each of the treatments under consideration will be the patient surviving for two weeks, said MSF, adding that no one would be tested without informed consent.

Patients in the Conakry trial will be administered with blood or plasma containing antibodies from survivors.

“We want to find out whether it works for Ebola, whether it is safe and whether it can be scaled up to reduce the number of deaths in the current outbreak,” said lead coordinator Johan van Griensven. 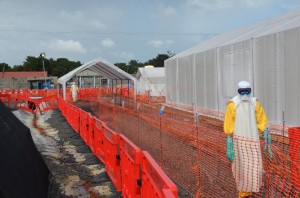 Health workers in protective gear stand outside an Ebola treatment centre in Monrovia (AFP Photo/Zoom Dosso)[/caption] The antiviral was selected from a shortlist drawn up by the World Health Organization (WHO), which is overseeing the project, after a review of a wide range of issues, including trials on non-human primates and availability.

MSF is in discussion for a third trial, on antiviral brincidofovir, in Liberian capital Monrovia but has not yet been given the green light.

“Conducting clinical trials of investigational drugs in the midst of a humanitarian crisis is a new experience for all of us, but we are determined not to fail the people of west Africa,” said Peter Horby, who would lead the Monrovia team.

Almost all of the deaths in the current outbreak have been in Liberia, Sierra Leone and Guinea, but smaller outbreaks have emerged in Nigeria, Senegal, the United States and Spain.

The European Union’s Ebola envoy Christos Stylianides ended a two-day visit to Sierra Leone on Thursday voicing alarm at an apparent acceleration in new cases in the country’s western region.

Mali is scrambling to prevent a serious epidemic after the deaths of an Islamic cleric and the nurse who treated him in the capital Bamako.

The health ministry said “several dozen” people identified as possible contacts had been tracked down and were under observation.