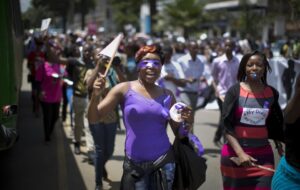 Kenyan women protest for the right to wear whichever clothes they want, at a demonstration in downtown Nairobi, Kenya Monday, Nov. 17, 2014. A recent incident in which a mob of men surrounded a woman and tore her clothes off, leaving her naked on the street in front of a bus stop after alleging that she was improperly dressed, is one of several such videos that have surfaced online in recent days leading to a groundswell of anger that on Monday prompted around 1000 demonstrators, including a number of men supporting the women’s cause, to march through the capital and protest online using the hashtag #MyDressMyChoice. (AP Photo/Ben Curtis)[/caption]

NAIROBI, Kenya (AP) — The grainy mobile phone video shows a mob of Kenyan men surround a woman and grab, grasp and yank her clothes until she is naked. Several such videos have emerged recently of attacks by males who deem a woman to be provocatively dressed. The attacks have created a groundswell of anger that saw mostly women protesters flood downtown Nairobi Monday.

The hashtag #MyDressMyChoice is trending in Kenya’s social media, as this East African country sees a clash between new, Western lifestyles and traditional African ways.

The attacks are not overtly religious in nature, though this is a conservative, mostly Christian country. The women at the march described “normal” levels of sexual harassment over the years and said that peers will warn other women that “you’re gonna get undressed” for wearing a particular outfit. “Kenyan men are in different groups. My father wanted me to be here and said you can dress however you want. Then there are others who think you are out of their reach and they try to victimize you,” said Machua, 26, who runs an aid group called Transforming Generations.

Women play an active role in Kenyan society. The country’s foreign minister is a woman, though few women hold high-ranking elected office. Parliament is a virtual men’s club, unlike in neighboring Rwanda, where more than half of parliament is female.

After the recent attacks, elderly Kenyan women are said to have rescued the naked victims by giving them a shawl to cover up.

About 10 percent of the approximately 1,000 people marching through the streets were men. James Wamathai, said he was marching because he believes in equal rights.

“I think it’s really horrible and no women should have to go through that,” said Wamathai, 33, who does commercial media work. “It’s a weird sexual fetish. If you see some of the videos some of the men are groping the women. … But it’s not based on anything (like religion) because in Africa we didn’t used to wear clothes.”

Just 100 meters (yards) from the march’s meeting point, park worker Ulda Akinyi emptied trash. Akinyi looked at the demonstration with disdain, and said she has instructed her three daughters to dress conservatively for fear of attracting unwanted attention. “Wearing miniskirts is the devil’s work,” said Akinyi. 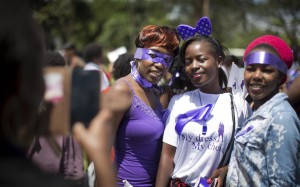 Men gathered against a nearby fence. Most said they didn’t support the cause. A man who gave only his first name, John, said he didn’t want Kenya’s women to “seduce” him by wearing revealing clothing.

“It’s like three-quarters naked if you are wearing one of those short skirts,” said David Ndongo, who works on one of Kenya’s mini transport buses known as matatus, where women can also face harassment.

Robyn Emerson is a 43-year-old American from Texas who has lived in Kenya for a decade. In America, she said, women talk about issues like equal pay and abortion rights. Kenya is just a couple steps behind, she said.

“I think there are so many things happening in Nairobi and Kenya all at once, a new way of living influenced by modernity which runs up against cultural stances,” she said. “But at the confluences we can’t say we want some parts of modern things — we want to be a middle income and have modern technology — and not the other things that come with it.”