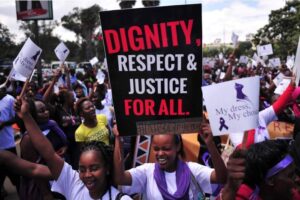 My Dress, My Choice protest in Nairobi[/caption] NAIROBI, Kenya (AP) — A mob of Kenyan men attacked and stripped a woman claiming she was inappropriately dressed just hours after nearly 1,000 people marched through downtown Nairobi to protest the rising wave of such assaults. Police responded by arresting nearly 100 people, a police official said Tuesday. Nairobi police criminal investigations chief Nicholas Kamwende said Tuesday that about 80 of the men arrested were conductors on mini-buses, known as matatus, where a lot of the recent sexual harassment has taken place. The woman attacked Monday evening was taken to a hospital with injuries. Kamwende called the attacks a “menace” and said police would increase their vigilance to stem the tide of mob harassment. https://www.youtube.com/watch?v=Uqz29aPo9SM The mobs of men have attacked women wearing mini-skirts and any outfit they consider too revealing including tight-fitting or sleeveless clothes. The hashtag #MyDressMyChoice is trending in Kenya’s social media as this East African country sees a clash between new, Western lifestyles and traditional African ways. The marchers on Monday demanded the right for women to dress how they want without being harassed or attacked. Deputy President William Ruto has weighed in on the issue by saying Kenya is not a primitive society and that the attacking men must be arrested. Conservative groups have countered that women must dress appropriately. https://www.youtube.com/watch?v=99sgIKsGsn4 The women’s march was organized after grainy mobile phone video made the rounds on social media in Kenya. The video showed a mob of men surround a woman and rip away her clothes until she was naked. Several such videos have emerged in recent days, though women say such attacks have occurred for years. The attacks are not overtly religious in nature, though this is a conservative, mostly Christian country. The women at the march said there has been sexual harassment for years but it has escalated recently. *AP/huffingtonpost]]>