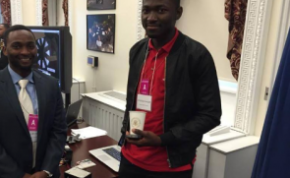 Photo: The Standard
Samuel Mbugua and Christian Emiyah.[/caption] “In the late 1980s, during the initial stages of the Internet, there was wild speculation that there was no way it was ever going to be a reality. Today, virtually nothing can happen without it,” says Samuel Mbugua. “The same principle is at the core of our research.” Mbugua is a Kenyan student who, together with a Nigerian colleague Christian Emiyah, presented a project on using visible light for the dual purposes of illumination and communication at the White House recently. Mbugua is currently pursuing a Masters in Electrical Engineering at Morgan State University, Baltimore. Mbugua and Emiyah presented a low cost demonstration platform for Visible Light Communication (VLC) that enables intelligent building controls and occupant tracking during the White House Maker Faire event. White House Maker Faire is an effort by President Barack Obama’s administration to encourage innovation in American colleges and industries. Its aim is to promote growth in the manufacturing sector and to steer competition with other industrialised nations in the fields of Science, Technology, Engineering and Mathematics (Stem). “It was such an honour to be invited by the White House to showcase our project to members of President Obama’s cabinet, deans of engineering colleges from across the country and other esteemed members of the Stem community,” Mbugua said. Terming the opportunity humbling, he says it was remarkable to be referred to as “ambassadors of making” by the most powerful office in the world. “What if we were to tell you that you can send information using the light that you see around you, just like you send information using radio waves such as Wi-Fi?” Mbugua started his presentation.He said the project primarily concerns sending information using the VLC principle. “We already have demonstrated, and proven, that we can send data from one point to another using the same light that light emitting diodes (LEDs) produce to illuminate a space. We are achieving this by pulsing the light electronically as a way to encode the bits to be sent, and attaching a visible light receiver to decode the light at the receiving device,” he says.

He said the information, once received, can be used to do anything, such as turn the utility equipment on or send an email from a phone to a compatible device. “This is all possible through meticulous hardware and software engineering. We are interested in VLC because, on a global scale, the integration of LEDs is continuously increasing in residential and commercial building lighting systems,’ Mbugua says. Mbugua added that LEDs are more energy efficient, environmentally friendly and less costly in use for long-term lighting compared to other options. LEDs also create the opportunity for VLC or ‘smart lighting’, which cannot be done with traditional light fixtures. “Visible Light Communication can augment and sometimes replace radio frequency (RF) based communication, which often suffers from limited bandwidth and tight regulation constraints. VLC can also be a more secure communication medium since signal leakage is limited by solid structures, such as walls. In our research, we are designing sequential messaging relay modules,” he said. The ongoing project is an innovative venture currently under intellectual property protection. It is funded by the National Science Foundation through the Rensselaer Polytechnic Institute (RPI) in Troy, New York, in collaboration with the Morgan State University. “It is important to credit Dr Kofi Nyarko, the director of the Engineering Visualization Research Laboratory at Morgan State University, who advises my partner Emiyah and I on this project,” Mbugua said. *Source allafrica/Star]]>