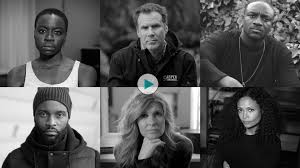 WASHINGTON – In a new multi-media campaign launched today by The ONE Campaign, more than a dozen international artists are teaming up with healthcare workers from Liberia to demand world leaders do more – and quickly – to fight the Ebola epidemic in West Africa and strengthen health systems so that future outbreaks can be quickly contained.

ONE is releasing the video alongside an interactive “Ebola Response Tracker,” which shows how much money countries have pledged, how much has actually been disbursed, and how many health workers and other contributions have been sent to affected countries. The video features an international array of artists, including: African musicians Fally Ipupa, Angélique Kidjo, Femi Kuti, and Ice Prince; Irish rocker and ONE co-founder Bono; American and British stars Akon, Ben Affleck, Connie Britton, Matt Damon, Will Ferrell, Morgan Freeman, Ellie Goulding, Danai Gurira, and Thandie Newton; German soccer star Per Mertesacker; and French actor Vincent Cassel. The world’s initial response to the Ebola outbreak was a failure—global leaders waited too long to act, and thousands have paid with their lives. The video, which is completely silent, highlights how the world waited for action to stamp out Ebola in West Africa, and how we cannot wait to invest in the health sector to prevent similar tragedies in the future. https://www.youtube.com/watch?v=gTs8hclMTxc     The video ends with a call to action for citizens to sign ONE’s petition demanding global leaders do what’s necessary to end the outbreak and strengthen basic health care systems in developing countries. Ebola is a global crisis and defeating it will take the combined efforts of government, business, relief groups and health care workers to bring it under control. ONE’s campaign is focused on ensuring governments do their part. Michael Elliott, President and CEO of ONE, said:

The initial response to the Ebola outbreak was too slow and too uncoordinated. Some countries have now stepped up to lead in a big way –with traditional donors like the US, UK, France and Germany all making meaningful contributions– but this is a global crisis and it demands a global response. While our first priority needs to be containing this outbreak, it is equally important that the world take steps now to invest in strengthening health systems so that future tragedies of this kind will be stopped in their tracks.

When you don’t have enough doctors, nurses or hospital beds, it’s tough to stop a crisis like this Ebola outbreak. We need our friends around the world to come forward with all the help they can right now, so patients can be treated in a dignified way, and we can end this nightmare. Then we need to work together to rebuild and strengthen West Africa’s heath care systems to stop another crisis like this from happening again.

ONE’s “Ebola Response Tracker” has four main findings: The devastation caused by Ebola has begun to erase much of the recent progress Liberia Sierra Leone, and Guinea have made in lifting people out of extreme poverty. Nobody wants to see the clock turned back. We need every government to deliver the funding, resources and expertise needed to bring Ebola under control. For a link to the full video, click here. For a link to the “Ebola Response Tracker”, click here. *Source One]]>