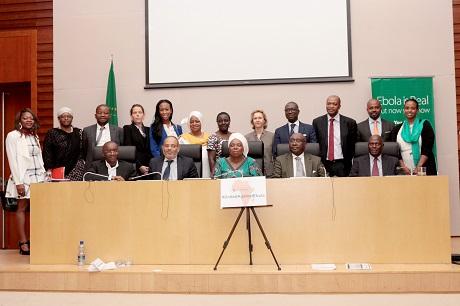 African Business Roundtable on Ebola[/caption] Addis Ababa, Ethiopia, November 8, 2014 – At an historic meeting on Saturday, November 8 at the African Union headquarters in Addis Ababa, Ethiopia, the African Union together with African Development Bank, the United Nations Economic Commission for Africa and leading businesses in Africa committed to join forces to create and support a funding mechanism to deal with the Ebola outbreak and its consequences. To date, the Ebola virus disease has devastated communities, infecting more than 13,700 people and killing over 4,900. While the global response to the current crisis has increased in recent weeks, there is still a critical need for additional competencies to care for those infected, strengthen local health systems and prevent the disease spreading. African business leaders at the Roundtable comprised CEOs from different sectors, including banking, telecommunications, mining, energy, services and manufacturing, among others. They agreed to establish a fund under the auspices of the African Union Foundation through a facility managed by the African Development Bank, to boost efforts to equip, train and deploy African health workers to fight the epidemic. At the meeting, participants saluted Governments, International Organizations, Institutions, NGOs and businesses that have been at the frontlines of the Ebola response, and agreed to urgently scale up the deployment of health workers in the three most affected countries: Liberia, Sierra Leone and Guinea. They also noted with appreciation that a number of African countries to date have pledged over 2,000 trained health workers to support the efforts in West Africa, with additional commitments expected. Responding to appeals from these countries, leading companies in Africa, present at the Roundtable, committed logistical support, in kind contributions and over $28 million as part of the first wave of pledges. In addition, a number of businesses represented in the meeting undertook to immediately consult with their governance structures and will announce their pledges to this effort in the next few days. Roundtable participants further called on the private sector across Africa to join them in this effort. Businesses also agreed to leverage their resources and capacity to help galvanize citizen action around a ‘United Against Ebola’ campaign, and to provide individuals across Africa and globally with an opportunity to contribute. These funds will be used to support an African medical corps – including doctors, nurses and lab technicians – to care for those infected with Ebola, strengthen the capacity of local health services and staff Ebola treatment centres in Liberia, Sierra Leone and Guinea. These resources will be deployed in the framework of the African Union Support to Ebola Outbreak in West Africa (ASEOWA), in close coordination with the national taskforces in the Ebola-affected countries and the United Nations Mission for Ebola Emergency Response (UNMEER). The resources mobilized will be part of a longer-term program to build Africa’s capacity to deal with such outbreaks in the future. Moreover, participants decided that the Africa Business Roundtable would become an annual meeting of the African Union to help solidify collaboration with the private sector in Africa on key development issues facing the region. Business leaders agreed on a follow up mechanism to implement the commitments made at Saturday’s meeting, reach out to other business entities, monitor the roadmap and agreed to act with urgency. AFDB/AU  ]]>