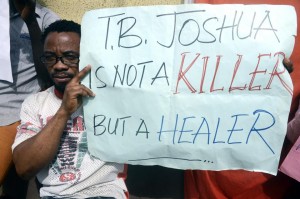 A man holds a placard to protest the coroner’s inquest on October 30, 2014 at the Ikeja High Court in Lagos into the cause of the collapse at a guesthouse of the Synagogue Church of All Nations, led by TB Joshua (AFP Photo/Pius Utomi Ekpei)[/caption]

Lagos (AFP) – Is it possible that a C-130 Hercules military cargo plane flying at low altitude dropped explosives on a guesthouse at Nigerian pastor TB Joshua’s megachurch, killing 116 people inside?

That depends on who you ask.

Joshua, a self-proclaimed prophet, failed to show up Wednesday at a coroner’s inquest into the causes of the September 12 collapse at the building in the grounds of his Lagos church.

But conspiracy theorists committed to absolving “The Man of God” of any wrong doing came out in their droves, offering a range of possible causes, even if consensus was hard to come by.

“We are not ruling anything out,” said Moses Onyegu, 29, and a member of a body he called the Group of Concerned Students, which believes the deadly collapse is part of an elaborate plot to spark Joshua’s “downfall.”

Onyegu has latched on to claims that a mysterious aircraft was hovering above the Synagogue Church of All Nations (SCOAN) compound in the minutes preceding the tragedy.

“The plane in the first place was not an ordinary air plane,” said Onyegu, from southern Delta state. “According to write-ups on the Internet, it was a C-130 Hercules jet,” he told AFP outside the court.

The suspicious aircraft theory first emerged days after the disaster when Joshua’s staff released video footage of a plane they said was circulating above the guesthouse.

Expert witnesses at the Lagos state inquest ruled out the theory of aerial sabotage or an explosion and the court has been told that the guesthouse did not have any planning permission.

Onyegu was among several dozen Joshua followers outside the Lagos courthouse to support “The Prophet” in case he decided to appear.

All stressed the immense popularity and charitable work of the pastor and televangelist, who has followers across Africa and abroad, and their mistrust of official versions of events.

For them, whatever truly happened, Joshua was not to blame.

“In Nigeria, we have fifth columnists,” said Oloja Olanrewaju, who identified himself as the secretary general of a group called the National Association of Nigerian Students. 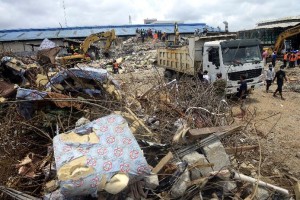 Rescue workers at the site of the collapsed guesthouse of the Synagogue Church of All Nations (SCOAN) at Ikotun in Lagos on September 17, 2014 (AFP Photo/Pius Utomi Ekpei)[/caption]

He declined to offer a specific theory for the collapse, not wanting to preempt the inquest’s findings, but suggested that “shadow stakeholders who benefit indirectly from any crisis” may have been involved.

Like Onyegu, he noted the importance of “the sort of air plane or helicopter” allegedly spotted above the church.

Nasir Lawal, who was born a Muslim but converted to Christianity and is now a passionate Joshua follower, pointed the finger at Islamist group Boko Haram.

“They might be motivated by the fact that they don’t want Christians in Nigeria,” said the 35-year-old leader of a youth group in southwestern Ondo state.

Also noting the plane theory, he indicated that Boko Haram may have the capacity to send a military aircraft to Lagos, several thousands kilometres from its northeastern stronghold.

The Islamists have killed thousands in a five-year uprising, including scores of church attacks, but they are not known to have access to aircraft. 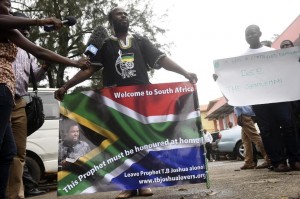 A member of the Synagogue Church of All Nations holds a placard of a South African flag with the picture of Nigerian preacher and SCOAN leader TB Joshua on November 5, 2014 (AFP Photo/Pius Utomi Ekpei)[/caption]

A row of news cameras lined the entrance to the hearing room in anticipation of Joshua’s arrival, with idle Nigerian reporters swapping guesses as to whether one of the country’s most prominent — and richest — pastors would show up.

Joshua’s lawyer, Olalekan Ojo, told the inquest that his client did not honour the court summons because he did not personally receive a written notice requiring his appearance.

But Joshua’s supporters said his no-show came as a relief, because questioning from civilian investigators would have been an insult to “The Prophet”.

“Bringing The Man of God down to this court is not very comfortable for me,” said 21-year-old Precious Enegide.