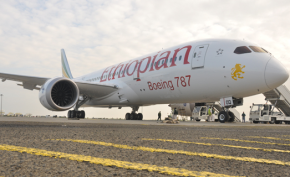 Photo: Addis Fortune
Ethiopia takes steps towards liberalising African skies.[/caption] Ethiopia is to take the lead in fully implementing the Yamoussoukro Declaration (YD) and liberalizing the African skies. In 1999 African Ministers responsible for civil aviation gathered in the Ivorian city of Yamoussoukro and adopted the Yamoussoukro Declaration that calls for the liberalization of African skies for African airlines. The declaration aims at establishing a single African air transport market by avoiding market restrictions imposed by bilateral air service agreements. The decision was adopted by African heads of state in 2000 with a two year grace period. However, after 20 years African states have not been able to fully implement the declaration. African skies are not open to African airlines. The African air transport market is still restricted by protectionist bilateral air services agreements. At the African Airlines Association’s (AFRAA) 46th annual general assembly held from November 9-11 in Algiers, Algeria the secretary general of the association, Elijah Chingosho (PhD), said that African states are expected to announce the full implementation of the Yamoussoukro Declaration at the African Union Summit to be held in Addis Ababa in January 2015. Chingosho said that in the coming few weeks champion countries will take the lead in announcing the full implementation of the YD. Speaking of the Ebola epidemic, Chingosho said that it is science not fear that should guide African nations. “We should tackle the problem together scientifically. We should not isolate the affected countries,” Chingosho said. Ethiopian Airlines Group CEO, Tewolde Gebremriam, who participated at the forum told The Reporter that Ethiopian is willing and ready to take the lead in liberalizing African skies for African airlines. “The plan is to establish a single African air transport market by 2015. By the end of 2015, bilateral air service agreements should be null and void,” Tewolde said. Ethiopia, Kenya, Ghana, South Africa, Togo, Nigeria are expected to be the champion countries to announce the full implementation of the YD before January. A recent study commissioned by the International Air Transport Association (IATA) lists the benefits African states could reap by liberating their air transport market. The study was conducted by an independent consulting firm, InterVISTAS, on 12 countries. The study indicates that the 12 countries could generate additional 1.3 billion dollars to their GDP and create extra 155,000 jobs by liberalizing their markets. The study indicates that Ethiopia could open additional 14,800 jobs and generate extra 59.8 million dollars GDP. An aviation expert that The Reporter spoke to at the AFRAA conference said that African states have been very slow in implementing the YD. “African states often speak of African economies integration but ironically most African states deny traffic rights to African airlines and grant it to non-African carriers, mostly to Gulf carriers,” the expert said. “This has to change,” he added. In a related development, AFRAA honored Ethiopian Airlines as the “Best African Airline of the Year” during the association’s annually general assembly. Tewolde Gebremariam, Ethiopian Airlines Group CEO, received the accolade. Ethiopian was crowned “Airline of the Year” for its exceptional results in 2013, consistent profitability, and sound strategy, which has enabled it to forge win-win partnerships with fellow sisterly African airlines. This is the third year in a row that Ethiopian has continued to receive the award from AFRAA. Upon receiving the award, Tewolde remarked: “We are highly honored for this recognition by fellow sisterly airlines in Africa. The award goes, first and foremost, to the more than 8,000 employees at Ethiopian, who work very hard every day to provide the best services on the ground and in the air to our valued customers. We also thank our customers for giving us the opportunity to serve them and for traveling on Ethiopian in great numbers. It is also a testimony of the soundness of our Vision 2025 fast, profitable and sustainable growth strategy.” Tewolde said although Africa is registering rapid economic and travel growth, this growth is primarily benefiting non-African carriers. “The times are really challenging for African airlines, whose very survival is at risk, unless two things happen very quickly. Firstly, African carriers must look inwards in the continent to leverage on the available internal resources to create synergy through collaborative partnership among themselves. Today, Africa has world class Aviation Training Centers, MRO facilities and management expertise. I am convinced that there are ample opportunities for deepened commercial, technical and other types of partnerships among African carriers. Secondly, Africa must become one single unified market without any restriction for African airlines. The continued fragmentation of our skies is only benefiting foreign carriers and will lead to our certain demise. African governments must act now and fast to unify African skies, which would also give great impetus to the continent’s economic integration.” *Source Allafrica]]>