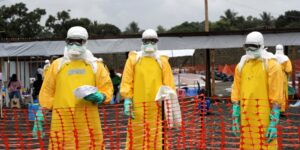 Staff members at ELWA 3, MSF’s Ebola management center in Monrovia.[/caption] It’s five o’clock in the morning. Two MSF vehicles drive along the streets of Monrovia, Liberia, the country most affected by the Ebola epidemic in West Africa. Noley Smart and Emmanuel Tokpa, two Liberian MSF staff members, put on gloves in the darkness. This morning they will distribute around 1,000 family protection and home disinfection kits in West Point, one of the Monrovia’s slums. “We do it in the early morning so we avoid big crowds where people will be sweating and touching each other,” says Noley. “We go out every morning, wash our hands and boots before starting and try to make sure that people have no physical contact.” The two vehicles park next to a warehouse and the team jumps out. Inside are the stacks of the kits that they will distribute to hundreds of households. Since September, over 50,000 kits have been distributed, and MSF aims to deliver a total of 70,000, covering a target population of 245,000, in the coming weeks. The kits, which contain materials like chlorine, soap and protective gear, allow people to protect themselves in the event that their family members fall ill and they cannot get them to a healthcare facility. The buckets are put on a table and people come to pick them up in groups of ten. Noley, Emmanuel and the rest of the team have set up a circuit: people enter from a football pitch, form a queue, pick up their kits and exit onto the street. “It is a very physical job,” says Emmanuel. “You need to do everything in one go: give the kits, communicate with people and ask them to move fast.” MSF’s first contact with communities takes place two days before a planned distribution, when teams visit and screen a video that demonstrates how the distribution will take place and what the kits contain. They tell people that the protection kit is not designed to allow people to provide medical care – it is an emergency solution for families with someone at home with symptoms, and for those who need to disinfect their home after a family member dies. “Ambulances should be able to pick up everyone calling the emergency number, but the service is not working well,” says Anna Halford, who coordinates the distributions. “No one should be disinfecting their home without help, but unfortunately it is happening. This is an imperfect solution in a situation that is far from ideal.” The weak international response to the epidemic so far has left gaps in several key areas of this complex emergency. It’s not only about beds. In Monrovia, the ambulance and referral system can’t cope with the situation and taxi drivers often refuse to carry passengers with symptoms. Contact tracing needs to be systematically implemented and body management remains a problem. The main sites of Ebola transmission are funerals, health facilities that aren’t prepared and the homes of people who are sick and symptomatic. The virus can wipe out entire families, and the distribution of these kits are an attempt to stop this happening by slowing transmission in the home. “I used to get along with one of my neighbours. She contracted Ebola,” says Emmanuel, after the distribution. “Her boyfriend, father and mother got Ebola from her. When I was told she died I couldn’t believe it. Only her father survived. This is one of the reasons why I am here.”