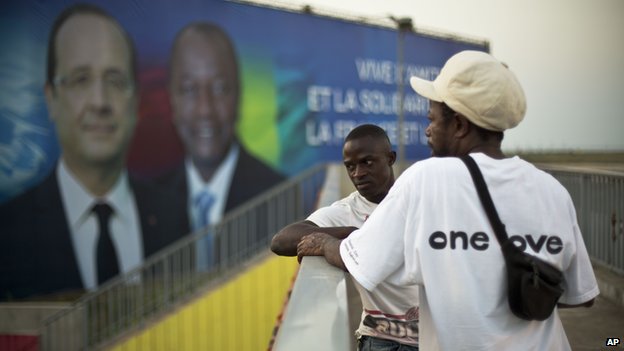 French President Francois Hollande is visiting Guinea, on the first trip by a Western leader to a country at the centre of the latest Ebola outbreak.

After arriving in the capital, he told his hosts France had a “duty to support you” in the fight against the virus. More than 1,200 people have died of Ebola in Guinea, which is to trial a test to diagnose Ebola. The outbreak was now “stable” in the West African country, the World Health Organization (WHO) said last week. France has pledged 100m euros (£79m; $125m) to help tackle the disease by opening several care centres in Guinea, a former French colony. More than 5,600 people have died in the latest outbreak, with Guinea, Sierra Leone and Liberia the worst hit. “We have a duty to support you,” Mr Hollande said after his arrival in Conakry. “We stand together in the fight against the virus.” During his one-day visit, he is due to tour healthcare centres and take part in round-table discussions on Ebola, according to AFP news agency. Paris plans to send mobile health clinics to Guinea and fund 200 beds for Ebola patients. After Guinea, President Hollande will fly to Senegal to take part in a summit of French-speaking leaders. Solar-powered lab A new blood and saliva test announced is to be trialled in Guinea, which researchers involved say gives a faster diagnosis, and so increase the chances of survival and reduce transmission of the virus. The trial, which is led by the Pasteur Institute in Dakar, Senegal, uses a “mobile suitcase laboratory” and will take place at an Ebola treatment centre in Conakry, Guinea. It is portable, solar-powered and can be used at room temperature. The project is being funded by the Wellcome Trust medical charity and the UK’s Department for International Development. [caption id="attachment_14446" align="alignright" width="594"] 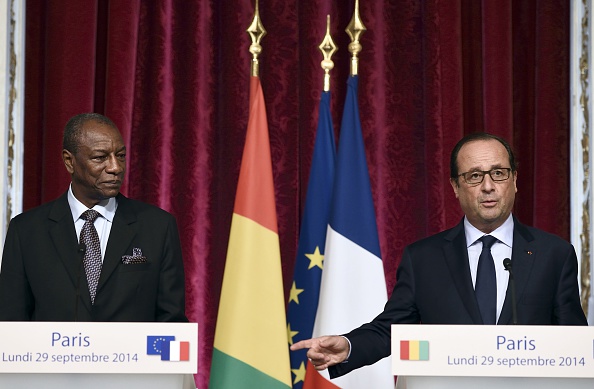 Francois Hollande: “I want to be here in Guinea to show France’s solidarity through the trials you’re experiencing”[/caption] Dr Val Snewin, the international activities manager at the Wellcome Trust, said: “A reliable, 15-minute test that can confirm cases of Ebola would be a key tool for effective management of the Ebola outbreak – allowing patients to be identified, isolated and cared for as soon as possible. Guinea has not been as badly hit by Ebola as neighbouring Sierra Leone and Liberia. But eight months since the outbreak was first declared, some still do not believe Ebola is a real disease, and health teams trying to trace new potential cases are still being refused entry to some villages, says the BBC’s Tulip Mazumdar, who recently visited the Guinea village where the outbreak began. There were still some flare-ups in the south-east, but things were improving elsewhere in the country, WHO co-ordinator Dr Guenael Rodier told the BBC. Ebola is spread only through direct contact with the bodily fluids of an infected person showing symptoms, such as fever or vomiting. People caring for the sick or handling the bodies of people infected Ebola are therefore especially vulnerable.
*Source BBC
]]>