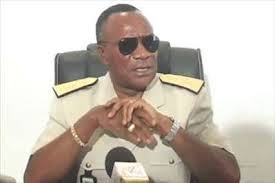 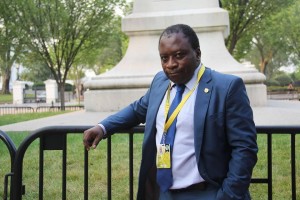 Elie Smith[/caption] General Jean Francois Ndenguet doesn’t have any respect for politicians, be they of the ruling Congolese Workers Party or the PCT and its affiliates or the opposition. The other people that he doesn’t respect which is a paradox are the family of President Denis Sassou Nguesso. He has a particular disdain for the children of the president and says it loud and clear to everyone who cares to listen, that, the children of the President of the Republic are worthless and as soon as their father is not around, he will put them on the right track. Whatever that means, it is left for jean François Ndenguet to explain. The only person and member of the family of the President that he has an ounce of respect is Jean Dominique Okemba. His respect for Jean Dominique is based on the fact that, he (Jean François Ndenguet) is what he is today because of Mr. Okemba.  Mr. Okemba is a distant nephew to the President of the Republic and the secretary general of the National Security Council. The ounce of respect that, Jean Francois Ndenguet has for Jean Dominique Okemba has currently dwindled, for he tell everyone that, he is the one that does the all the work for Jean Dominique Okemba, in other words, he is claiming that, Jean Dominique Okemba is incompetent. Ruined the reputation of the Police Opportunistic like a feline, he nevertheless has two giants’ portraits in his office. On his right is that of Jean Dominique Okemba and on his left that of President Denis Sassou Nguesso. Raymond Zepherine Mboulou is the minister of interior and his de facto boss, but Jean Francois Ndenguet doesn’t respect him. He is the one who calls the shot and the minister follows. Jean Francois Ndenguet has become so powerful that, he has created a special police unit within the National Police Force. His special Police unit is abbreviated GRB. They take instructions directly from him and not from the ministry of interior and at the Ouenze Madzadza Police station, which is known as his private police stations, where rape and summary executions takes place, he has constructed a special  building to house his unit or private militia. He has ruined the reputation of the Police to a point that, every one you ask who lives at the Ouenze Madzadza neighborhood and beyond knows that, all armed robberies in the city and other violent crimes such as rape are organized by Jean Francois Ndenguet. His roguish nature is alleged to known by the President of the Republic. One person who is related to the president, once told me that, the president was once jokingly saying that, the reason why he has allowed Ndenguet for too long at the head of the Police is because, he is a criminal and knows how to fight crime and also that, even drug addicts know Ndenguet, because he consumes drugs as well.  Whether the president was being sarcastic or not is another story all together. But it is beyond comprehension, why the president can allow at the head of the Police such as corrosive person who tarnishes his reputation of the country and the Police.  But what the president did not say or did not know is that, whenever General Jean Francois Ndenguet has winds that, there are plans for his removal as head of the Police, there is an increase of crime wave around the country, especially in the cities of Brazzaville and Pointe Noire. Jean Francois Ndenguet operates like an arsonist and a firefighter at the same time. Ambitious While working in Congo, before my expulsion, two Policemen working for the judicial wing of the police came into my office and presented me with a memorandum detailing the criminal way that Jean Francois Ndenguet operates. They wrote in their memorandum, that, their Boss had a team of Policemen, specialized in armed robbery and assassinations.  They also said, those killed by the Police were taken to the north of the city of Brazzaville and thrown in a river called Lefini. I don’t know whether what was written in the memorandum was true or false. But, I also do not think that, the twosome will walk in to my room just to frame-up their boss. Anyway, in the city of Brazzaville, everyone knows that, he is the one who stages most armed robberies. The head of the Congolese Police Force is obsessed with popularity and acts in populist manner as though he was a politician. On the 16th of September, that is six days after the armed robbery in my home, I went to see him in his office at his invitation. He told me that, ordinary Congolese love him and that, only the corrupt elite hated him. And in a bid to be popular and also prepare the ground work for his civil political career, he has tried to head several local football clubs.  Even though he is trabalist and despises southern Congolese, especially those of the Pool region, he shamelessly wanted to head a mythical football team of the south of Brazzaville called Diable Noir FC. After failing in his attempt to control Diable Noir FC, he tried to manage two football teams of the north of Brazzaville, namely, Etoile and Cara. The worst is that, General Jean Francois now has presidential ambitions and thinks that, he will succeed President Denis Sassou Nguesso in 2016. *Elie Smith is an African Journalist who was a recent victim of questionable attacks and expulsion from the Congo.]]>