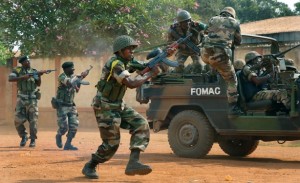 Central African forces[/caption] Loango, Southern Congo — With hundreds of soldiers from its member states successfully completing a series of joint exercises and manoeuvres in Congo, the Economic Community of Central African States (CEEAC) says its Multinational Force for Central Africa (FOMAC), is now ready to intervene in local conflicts and be part of global anti-terrorism initiatives. The recently completed Loango 2014 operations brought troops from eight of CEEAC’s 10 member countries (Angola, Burundi, Cameroon, CAR, Chad, Congo, Democratic Republic of Congo, Equatorial Guinea, Gabon, and Sao Tome et Principe – Rwanda may rejoin) to Loango in the south of Congo. During 10 days of intense exercises, Congolese, Angolan and Cameroonian soldiers disembarked from a vessel supplied by Equatorial Guinea. On land, they constructed a field hospital and staged simulated exercises in which hostages were liberated and a rebel leader was captured and removed to a safe location. The operations involved both ordinary soldiers and more specialist parachute units. In overall command was Congolese Chief of Staff Gen Blanchard Guy Okoï. Presidents Denis Sassou of Congo, Ali Bongo Ondimba of Gabon and Obianga Nguema of Equatorial Guinea were among the guests at a closing ceremony on 29 October. Ahmad Allam-Mi, a former Chadian foreign minister, now CEEAC’s secretary-general, said the organization had shown how quickly it could respond to human needs in time of crisis. “Our force is capable of bringing help to the population,” Allam-Mi emphasized. There was a strong emphasis in Loango on fighting terrorism in central Africa. Gabon Defence Minister Ernest Mpouho Epigat pointed to the challenges posed by maritime piracy, but also warned that the Nigerian Islamist movement Boko Haram was in striking distance of central African nations. “Cameroon is now on the frontline,” Epigat warned. “It is good that the countries of the sub-region hold this kind of exercise to see how we can pool our personnel and resources to respond to these threats and push them as far away as we can.” A bit of history Until recently, CEEAC was seen as slow to develop a serious military profile. Formed in 1983, it was virtually moribund for much of the 1990s, falling victim to regional rivalries and having a lack of shared priorities. Geographically, it seems an incongruous grouping of nations, stretching from Sao Tomé and Principe in the Atlantic to Chad. CEEAC used an extraordinary summit in Libreville (Gabon) in February 1998 to put itself on a new footing. At a subsequent meeting in Malabo (Equatorial Guinea) in 1999, heads of state outlined the need to work more closely on peace and security issues. Tracing CEEAC’s history, security analyst Angela Meyer observed in Peace and Security Cooperation in Central Africa: Challenges and Prospects: “The lessons from years of conflict and crises made it clear that regional economic cooperation could not succeed without regional peace and security.” Progress was initially slow. Member states were bitterly divided over the conflict in the Democratic Republic of Congo, which broke out in 1998. Chad and Angola sent troops to defend embattled President Laurent Kabila; Rwanda and Burundi backed rebels advancing on Kinshasa. Stronger regional framework takes shape But a stronger regional security framework did take shape. The Council of Peace and Security of Central Africa (COPAX), operational since 2004, was set up to guide regional policy on defence and security and given a mandate not only to deploy civilian and military missions, but to help mediate in crises. The Commission of Defence and Security, made up of military and police chiefs, works under a regional Planning Element and military headquarters, based in Libreville. CEEAC has at its disposal a Strategic Analysis Group and a Rapid Alert Mechanism for Central Africa, operating as an early warning system. Pointe Noire in Congo hosts a Regional Centre for Maritime Security. The collective security initiatives taken in Central Africa are in line with priorities outlined for the African Union’s (AU) African Peace and Security Architecture (APSA), which stresses the need for viable regional structures that replicate what the AU is doing at continental level. For example, the AU wants to see regional versions of its Peace and Security Council (PSC) and its Continental Early Warning System, which CEEAC’s MARAC seeks to emulate. Critical to the AU’s long-term security plans is the African Standby Force (ASF), which has the right to intervene in a member state “in grave circumstances, namely war crimes, genocide and crimes against humanity”. The ASF’s viability is premised on efficient standby arrangements with Africa’s five sub-regions, which should “enable Africans to respond swiftly to a crisis unhampered by any heavy political and instrumental burden.” In principle, each regional bloc now has its own contingent earmarked for ASF deployments, with FOMAC joining parallel forces in other parts of the continent. An AU review of APSA’s progress in 2010 acknowledged serious problems with each region in delivering on commitments, pointing to ongoing conflicts and a lack of operational capacity as major handicaps. FOMAC – a force in progress FOMAC was not singled out for criticism, but clearly needed to become more professional and better coordinated.

Set up in 2002, FOMAC’s standing orders identified the force as being made up of military, police, gendarmerie and civilian personnel, ready to carry out “peace, security and humanitarian assistance missions”. FOMAC’s duties also extend to disarmament and demobilization work and control of fraud and organizational crimes. Compared to the experience gained by Economic Community of West African States (ECOWAS) troops in West African conflicts, including Liberia, Sierra Leone and Guinea-Bissau, Central African soldiers saw little combat in regional missions, but no shortage of capacity-building and practical collaboration. Loango 14, which was months in the planning, was the latest in a series of multinational training events, going back nearly a decade, which have become increasing ambitious in their scale and objectives. Chad played host to the Barh el Ghazel exercises in 2005 and 2007. Over 3,500 personnel took part in Kwanza 2010 in Angola. Filling a vacuum in CAR It was the succession of crises in CAR which gave Central African troops their first exposure to a regional war zone. FOMUC, the multinational force of the six-nation Economic and Monetary Community of Central Africa (CEMAC), was stationed in Bangui with a brief to support the CAR Armed Forces, which had been hit by a wave of mutinies, threatening the rule of President Ange-Félix Patassé. (CEMAC members are: Gabon, Cameroon, CAR, Chad, Congo and Equatorial Guinea). FOMUC was superseded in 2008 by the Mission of Consolidation of Peace in CAR (MICOPAX – a specific mission of FOMAC). Funded in part by the EU and working closely with French troops, its mandate was to help establish peace and security. After a long period of low-intensity guerrilla activity and hesitant peacebuilding, MICOPAX was hinting at a withdrawal by September 2012. A Chadian commander told Radio France Internationale (RFI): “Elections have been held and we are now in a phase of consolidating the peace.” But the emergence of Séléka, a newly formed, heavily armed rebel coalition ended that complacency. As Séléka made critical territorial gains from December 2012, CEEAC called for more troops, but could not prevent the fall of Bangui. As CEEAC tried, with difficulty, to drive the peace process outside CAR, MICOPAX numbers tripled, with over 2,000 troops deployed. MICOPAX 2’s brief was ambitious: to guarantee security, provide protection and help restore police and judicial system. The leading contributors were Congo, Burundi, Chad and Rwanda, although Rwanda had left CEEAC in 2007. Often overshadowed by the French military presence, FOMAC again faced accusations of poor leadership and incoherence and having little real presence outside Bangui. FOMAC’s Chadian contingent was accused of aligning itself with the Séléka rebels, a charge strongly denied by the Chadian authorities. In December 2013, after lengthy talks between the AU and CEEAC, peacekeeping operations were formally transferred to the African-led International Support Mission to the Central African Republic (MISCA), which in turn transferred authority to the UN Multidimensional Integrated Stabilization Mission in CAR (MINUSCA) in September 2014. Troops from CEMAC countries still make up the vast majority of troops deployed in the CAR. The verdict on MICOPAX FOMAC’s role in the country has been much criticised. But Alex Vines, head of the Africa programme at the Royal Institute of International Affairs (Chatham House), said FOMAC soldiers had endeavoured to protect the civilian population, perhaps more effectively than other outside forces. “It was not a particularly exemplary operation”, Vines told IRIN. “But the troops were there in very difficult circumstances.” Vines, who has authored a 10-year study of the AU’s approach to continental security, A Decade of African Peace and Security, Architecture, said all of the regional forces meant to contribute to the ASF fell short of the AU’s requirements. He noted the lack of a regional leader, the role played (controversially) by Nigeria in West Africa in the past, and also of states, like Angola, having a stake in different regional blocs. Rwanda rejoins the fold Rwanda pulled out of CEEAC in 2007, pleading insufficient funds, and engagements in too many other regional blocs, the East Africa Community (EAC), for example. The deployment of Rwanda troops in the CAR as part of MICOPAX suggested that Rwanda was ready to re-engage with CEEAC. This was confirmed by Rwandan Foreign Minister Louise Mushikiwab at Loanga, who said her country had come a long way from the genocide of 1994 and wanted to play a full role in CEEAC. “We have decided to rejoin our brothers and sisters in Central Africa with whom we share an important heritage,” Mushikiwabo explained. “At the next of its summits, we will reintegrate with CEEAC. With great pleasure we will come back into the heart of the family.” *Source Allafrica]]>