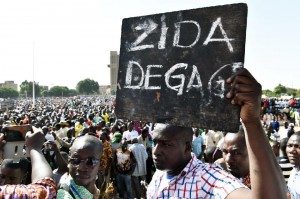 A man holds up a placard that reads in French, “Zida get out”, referring to Isaac Zida, a high-ranking officer named by the military to lead the country’s transition, during a protest in Ouagadougou on November 2, 2014 (AFP Photo/Issouf Sanogo)[/caption] Ouagadougou (AFP) – Burkina Faso’s army, political parties and civil society leaders agreed in crisis talks on Wednesday that the country’s political transition should last a year with elections to be held in November 2015.

The talks, mediated by three west African leaders and also attended by religious and tribal chiefs, failed to name a new leader to head a unity transition government.

But a statement after the meeting said all parties had agreed that an “eminent civilian personality” should head the transition.

Ghana’s President John Dramani Mahama, who mediated alongside his Nigerian counterpart Goodluck Jonathan and Senegal’s President Macky Sall, said he expected a transitional government to be put in place soon.

“I believe that… in days rather than weeks, we’ll be able to achieve an agreement and install a transitional government,” he said.

“Our intention was not to take names back to the ECOWAS summit,” he added, referring to an emergency meeting of African leaders due to be held in Accra on Thursday.

“It’s a decision for the people of Burkina Faso. They must be the ones to decide. Pain is still fresh in people’s mind.”

The trio of presidents had travelled to Ouagadougou to press for a swift handover of power back to civilians.

Burkina’s military last week appointed one of its own, Lieutenant-Colonel Isaac Zida, to run the country following the ouster of president Blaise Compaore in violent protests.

In scenes compared to the Arab Spring, Compaore was forced to flee the country after tens of thousands took to the streets and set parliament ablaze in anger at efforts to extend his 27-year rule.

The talks did not start well on Wednesday, with opposition leaders storming out in protest over the possible involvement of Compaore loyalists in any provisional government.

“We haven’t even buried our dead yet and they are putting arrogant people back in office who held the people in contempt,” said Luc Marius Ibriga, spokesman for the civil society groups, as their representatives left the room.

Security guards had to intervene as emotions ran high. 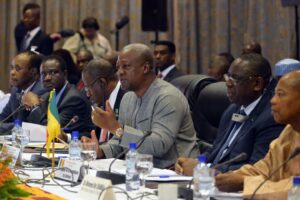 Ghanaian and ECOWAS president John Dramani Mahama (3-R) talks during a meeting with the officials and state leaders, and Burkinabese opposition leaders, in Ouagadougou on November 5, 2014 (AFP Photo/Issouf Sanogo)[/caption]

“We do not want to talk with the old governing party. They represent Blaise Compaore,” said Rose-Marie Compaore, parliamentary leader of the main opposition group, the Union for Progress and Change.

Both groups were persuaded to return to the negotiations, only for members of the ruling party to then refuse to sit with them.

The opposition’s main leader Zephirin Diabre objected to a proposal by the west African leaders that each group submit three candidates for a transition government.

It is a “question of sovereignty,” said Diabre.

Tensions were already running high after the military arrested pro-Compaore politician Assimi Kouanda on Tuesday night for calling for demonstrations in support of the deposed ruler.

There has been mounting international pressure on the military to return the country to civilian rule, with the African Union threatening sanctions and Canada withdrawing aid.

Zida, the interim leader appointed by the army, told unions on Tuesday he would return the country to civilian rule within two weeks.

“If everyone agrees, there is no reason that the transition shouldn’t be done within two weeks,” Zida said, according to union leader Joseph Tiendrebeogo.

“They came to tell us that they would hand back power to civilians,” he said. “The country should regain peace and quiet.”

The army has made similar pledges over the past couple of days, without taking concrete action.

Former prime minister Roch Marc Christian Kabore said whoever takes over the country should be a civil society figure rather than a politician or military chief. 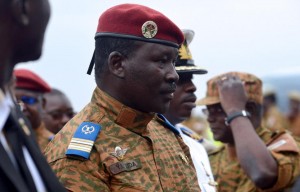 Isaac Zida, (C), named by Burkina Faso’s army as interim leader, arrives to welcome international dignitaries at the Ouagadougou airport on November 5, 2014 (AFP Photo/Issouf Sanogo)[/caption] “It’s obvious we have to find someone who has no clear political affiliations so as not to have a biased view on the transition,” said Kabore, who heads the Movement of the People for Progress. French President Francois Hollande said Tuesday that Paris helped evacuate Compaore to prevent a potential “bloodbath”.

Compaore and his wife are staying in a government mansion in Yamoussoukro, the capital of neighbouring Ivory Coast.

Meanwhile, international donors whose funding is crucial to the impoverished country, were watching the situation closely.

Canada, which provided some $35.6 million (28 million euros) in aid to Burkina Faso between 2012 and 2013, suspended assistance, saying funding would be restored when a “legitimate and accountable civil authority has been re-established”.

Washington said it was still “gathering facts” but could yet withdraw its $14 million annual aid package.