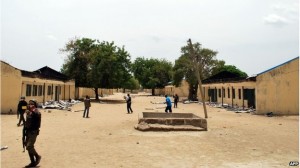 Boko Haram militants have seized the north-eastern Nigerian town of Chibok, the home of more than 200 schoolgirls the insurgents kidnapped in April, residents who fled have told the BBC.

Militants attacked and took control of the town, in Borno state, on Thursday evening, residents said. The militants have repeatedly targeted villages around Chibok over recent months. Boko Haram says it is fighting to create an Islamic state in Nigeria. A senator for Borno state, Ali Ndume, told the BBC Hausa service that security forces posted in the town ran away when the insurgents attacked. Residents told the Sahara Reporters news website that the militants headed to the centre of Chibok and declared that they were taking it over as part of their caliphate. Changed tactics The schoolgirl kidnappings in Chibok caused worldwide outrage and sparked a social media campaign.
Since the kidnapping people have complained that the area was not well protected and many residents of Chibok had already moved to safer parts of the country, fearing another attack. The BBC’s Will Ross reports from Nigeria that the military has repeatedly failed to defend towns and villages in the north-east, allowing Boko Haram to steadily expand the area they control. The crisis in Nigeria is deepening every week, but politicians appear more focused on next year’s elections, our correspondent says. Boko Haram has changed tactics in recent months by holding on to territory rather than using hit-and-run attacks that have left thousands dead. Last month, the group dismissed the government’s claims to have agreed a ceasefire. The government had said the ceasefire would set the stage for the release of the Chibok schoolgirls. Chibok is a relatively small, mainly Christian town. Its seizure comes a day after a government helicopter came down in Yola, in north-east Adamawa State – the second military helicopter to go down in the area in a week. Also on Thursday, officials and residents said the army had managed to recapture the town of Mubi, which was the biggest town under Boko Haram’s control. *Source BBC
]]>