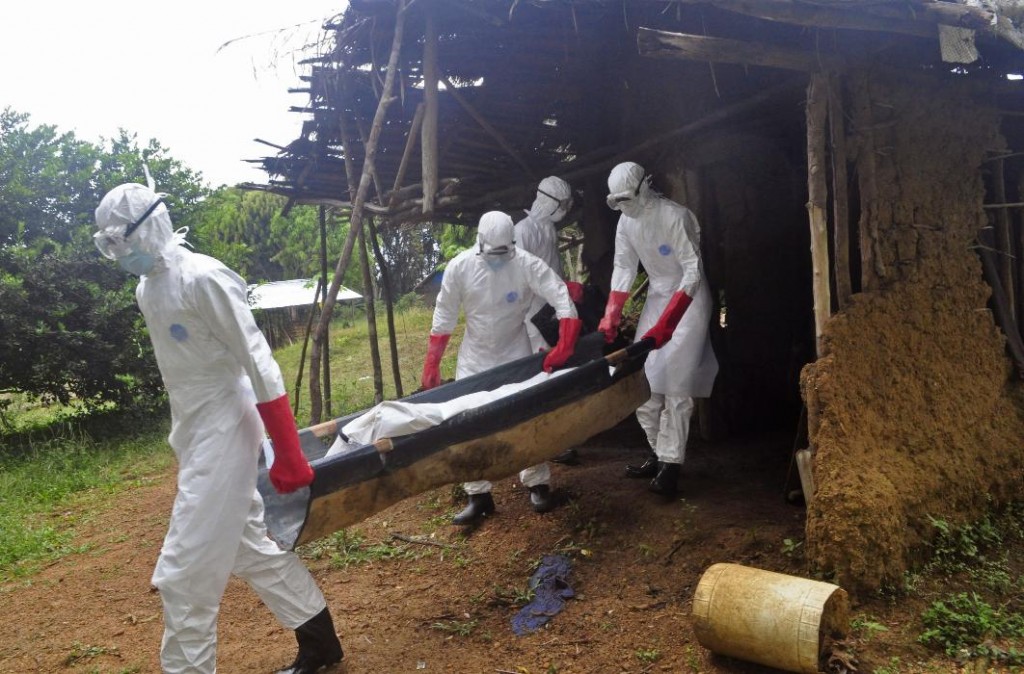 Ebola health care workers carry the body of a middle aged man that they suspected of dying from the Ebola, on the outskirts of Monrovia, Liberia, Saturday, Nov. 8, 2014. Dr. Robert Fuller didn’t hesitate to go to Indonesia to treat survivors of the 2004 tsunami, to Haiti to help after the 2010 earthquake or to the Philippines after a devastating typhoon last year. But he’s given up on going to West Africa to care for Ebola patients this winter. (AP Photo/ Abbas Dulleh)[/caption] CONAKRY, Guinea (AP) — It was a highway robbery but the bandits got more than they bargained for when they stopped a taxi in Guinea and made off with blood samples that are believed to be infected with the deadly Ebola virus.

Authorities publicly appealed on national radio Friday to the unidentified robbers to hand over the samples that were stolen from the taxi during its 265-kilometer (165-mile) trek on winding rural roads from the central Kankan prefecture to a test site in southern Gueckedou.

The samples, stored in tightly wrapped vials tucked into a cooler bag, were in the care of a Red Cross courier who was among nine passengers sharing a taxi when three bandits on a motorbike led the attack near the town of Kissidougou, a local Red Cross official said.

The robbers forced the passengers out, stole mobile phones, cash and jewelry, and fired into the air as they demanded the handover of the cooler bag, said Saa Mamady Leno of the Red Cross in Gueckedou. The courier, Abubakar Donzo, was later questioned by police.

Faya Etienne Tolno, a spokesman for the Guinea Red Cross, said the aid group had a shortage of vehicles for transport, which explains why a taxi was used. No one was injured in the incident, which took place on a road known for banditry.

“We don’t understand why they stole the blood sample. Perhaps they thought there was cash hidden in the flask,” Tolno said.

Dr. Barry Moumie, who heads patient care for the national Ebola response coordination committee, told The Associated Press: “We have informed the security services. If these thieves handle this blood, it will be dangerous.”

Ebola is spread primarily by contact with infected bodily fluids including blood, feces and vomit.

“I can assure you, however, that the sample-transportation procedures will now be strengthened to avoid such disappointments,” Moumie said.

The theft underscores how hazards abound and hiccups remain in the aid response, despite millions of dollars’ worth of international support pouring into West Africa to fight a virus now responsible for more than 5,000 deaths in Liberia, Sierra Leone and Guinea.

Dr. Hans Rosling, who is advising Liberia on its Ebola response, noted the difficulties of transporting such samples, saying countries and groups like the United States and the United Nations have rules about moving such hazardous materials.

In Liberia, “we use specifically allocated motorbikes and cars. We use what’s available and what’s reasonable. We have to organize things as we go along,” he said. “It may have been the correct decision in Guinea (to use a taxi) and the robbery was just a sad mishap.”

“There’s no way we can secure transport in all of this area,” Rosling said. “It was a good initiative to try to get the sample out.”

International assistance has been increasing in Sierra Leone, where the World Health Organization has warned about an “intense” surge in cases.

The United Nations Children’s Fund was working Friday to ramp up the number of community care centers in order to isolate more suspected patients. A total of 10 community care centers with eight beds each have been opened in the northern district of Bombali, one of the areas hit hardest in Sierra Leone. The outbreak in Sierra Leone alone is believed to have killed more than 1,200 people.

The community care centers, built after consulting local officials and traditional leaders in rural areas, are part of an effort to break transmission by isolating more suspected patients, James said.

Such centers are critically important in halting the spread of the disease. A WHO report released Wednesday indicates that Sierra Leone has the lowest percentage of Ebola patients who have been isolated — only 13 percent.

“It’s a way to isolate people, give them basic care in the area where they live. And it’s easier for families to see them,” James said. Those patients who test positive for Ebola will ideally be transferred to treatment or holding centers, he added.

A Dutch naval vessel arrived in Freetown, Sierra Leone’s capital, on Thursday stocked with medical supplies and two laboratories that will be staffed by Dutch experts and managed by Save the Children and the U.K.’s foreign assistance arm. The supplies were provided by nine European Union countries, according to Hans Docter, the Dutch special envoy for Ebola.

The Dutch government will soon announce an additional 10 million euros ($12.4 million) for NGOs working on the Ebola fight, Docter said.

WHO announced Friday that Congo’s separate Ebola outbreak was officially over after 42 days passed with no new cases. The outbreak, unrelated to the one in West Africa, was concentrated in northwest Equateur province and killed at least 49 people, according to local officials. Congo declared the outbreak over earlier this month.