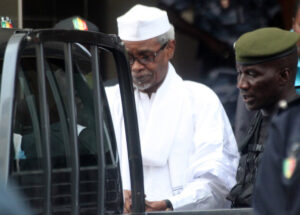 Former Chadian dictator Hissene Habre is escorted by military officers after being heard by judge in Dakar, Senegal on July 2, 2013.
© 2013 Getty Images[/caption] 141 African human rights groups from 32 countries today issued an open letter expressing support for the efforts by Senegal and the African Union to prosecute crimes committed during the rule of former Chadian president Hisséne Habré. Habré, who is accused of thousands of political killings and systematic torture from 1982 to 1990, was indicted in July 2013 by the Extraordinary African Chambers created by Senegal and the African Union, and is now in pretrial detention. If the judges decide that a trial is warranted, the case is scheduled to begin in early 2015. “A fair and transparent trial for Mr. Habré, should the evidence support the case going forward, would be a milestone in the fight to hold accountable the perpetrators of atrocities,” the letter says. “While some African leaders have claimed that Africa is unfairly targeted by international courts, a challenge has been to put teeth into African justice,” said George Kegoro, executive director of the International Commission of Jurists-Kenya, one of the letter’s signatories. “This case could help to do that.” Victims of crimes committed during Habré’s rule have campaigned for 25 years to bring him to court. But it was only in 2012 that the International Court of Justice enjoined Senegal to begin proceedings against Habré “without further delay” if it did not extradite him, and the new Senegalese government of Macky Sall promised to organize a trial. “Hisséne Habré’s victims have been tenacious in their struggle to bring him to justice,” said Yasmin Sooka, director of the Foundation for Human Rights in South Africa. “It is crucial for the trial and prosecutorial process to be exemplary, as it would send an important signal that it is possible to hold perpetrators to account in Africa and that victims of serious violations in Africa also matter.” Sooka was a member of the South African Truth and Reconciliation Commission (TRC) and later of the Truth and Reconciliation Commission in Sierra Leone. The open letter also calls on the government of Chad to provide fair and transparent trials for officials from Habré’s administration who are facing charges there, including two who are also being sought by the chambers’ prosecutor. Those trials are scheduled to begin on November 13. The signatories of the letter include the leading human rights organizations in Chad and Senegal. *Source HWR]]>