Meskerem Restaurant on 18th St ,NW Washington serves only ethnic Ethiopian food to a customer base which is 90 percent American. Photo by Ajong Mbapndah L[/caption] Visitors are greeted with flashy smiles from neatly dressed enthusiastic waiters, and the relaxing music is in sharp contrast to the crazy traffic and challenges getting a parking spot on the busy streets outside. The crowd is predominantly American but the spot is Meskerem, a chic restaurant that serves purely ethnicEthiopian food. Meskerem ,which is the name of the first month on the Ethiopian ethnic calendar, has been in business for over 29 years and its clientele today is 90 percent American says its owner Mohaba Mohaba.Located on 18th St, NW, Washington, DC, Meskerem occupying three floors, sums up the struggles and progress towards the recognition of the African food label in the Washington DC Metro area. A few blocks away at Dukem restaurant, which was the subject of a CNN featured story in 2011, Gaithacho who manages the restaurant says the bulk of his customers are Americans. With a blend of good customer service, Ethiopian restaurants have taken the lead in serving African food in Washington DC. In case your preference is for West African food, Bukom Café located on the same street with a live band on stage during weekends may be your spot. Washington, DC, boasts a strong and growing African population. Statistics from the city council and theMigration Policy Institute indicate that 17 percent of its population is foreign born. Ethiopians are the most populated group according to City statistics with about 17 percent of the African population followed by Nigerians, with 12 percent, Ghanaians 12 percent, Cameroonians 9 percent and Egyptians, Guineans, Sudanese and Somalis in lower numbers. 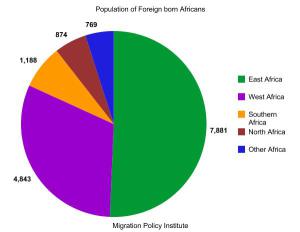 The ethnic composition of Africans in the District accounts for the composition of the food scene with Ethiopians and West Africans in ownership of most of the services. “The restaurants were originally meant to serve the needs of the large Ethiopian community here, but economic realities have encouraged us to reach out and rely more  on American as customers,” said Getachew Zewdie at Dukem restaurant. “Good food and customer service are what we are best known for at Dukem,” said Getachew who manages the restaurant opened with his brother in the late 90s. In the Office of African Affairs of the Washington, DC Government, African restaurants have a very important resource. Created in 2006, the Office has been instrumental in helping African businesses including food services to thrive. “We are working on a comprehensive manual for African food services,” said Aragie Tsedey Business Development Specialist at the Mayor’s Office on African Affairs. “OAA is conscious of the economic potential that the African food scene represents and is willing to help in building partnerships that bring out the best in the African food services,” Tseday said. A major initiative that the OAA is working on is the production of a manual and a comprehensive listing of African food services. This may be important because besides reviews done in papers like the Washington Post and  a few local papers, the African food services operate in dispersed ranks. Few of them are affiliated to groups like the National Restaurants Association. [caption id="attachment_14079" align="alignleft" width="300"] 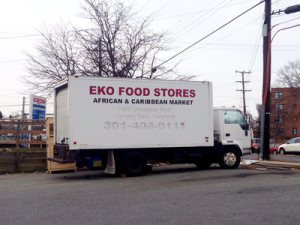 A label growing in confidence:Eko Food Stores in Hyattsville ,MD, has its own distribution trucks.[/caption] Gaining more recognition for the African food label is no longer limited just to restaurants. At the University of the District of Columbia, Prof Yao Afantcho,Head of the Sustainable Agriculture Research and Education Program has been leading a project to introduce Americans to ethnic African food and help them grow basic ones like vegetables. Afantcho, a Togolese National who is credited for introducing smoked fish to restaurants like Bukom Café, uses a pilot farm in Beltsville, MD, to  grow African vegetables known as njama njama in Cameroon and Nigeria,  and garden eggs known as njilu in the Democratic Republic of Congo. “We use food tasting events, focus groups, surveys, and training opportunities for small farmers interested in growing African food,” said Afantcho. Some of the African restaurants in the Washington DC, like Bukom Café and Come to Africa Restaurant in Takoma Park,  MD, get some of their vegetable supplies from the pilot farms managed by Afantcho. “Our goal is to encourage more Africans, and Americans to grow African food for their own use, and to eventually meet the growing demands of the African restaurants,” Afantcho said. “While people enjoy African cuisine when they visit, they do not understand thechallenges it takes to get the food here,” said Rosalyn Attey owner of Come to Africa Restaurant. “Growing African food here will help in reducing the cost and making sure it is eaten fresh,” Attey said in support of prospects of growing African food in the Washington DC metro area. Prof Afantcho said about 55,000 people have been involved in one way or the other with his program which also helps teach people how to prepare basic African dishes. Afantcho sees in the growing of African food a potential solution to the unsavory experience of Africans having their food items discarded by immigration officers at American Airports. Sylvie Bello sees in the African food scene the opportunity to market African culture. Bello who heads the Cameroon American Council was the brain behind a project two years ago to introduce African food to Washington DC schools. “If the Chinese have succeeded in making their food acceptable to Americans, I believe Africans can do same,” said Bello in justification of her outreach to DC schools. [caption id="attachment_14081" align="alignright" width="300"] 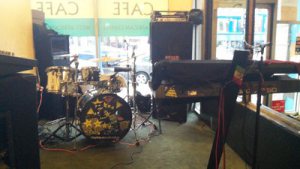 Band Equipment at Bukom Cafe. The life band on weekends is a crowd puller. Photo by Ajong Mbapndah L[/caption] “Food is one of the easiest way to show the African identity and we were happy with the response from the schools visited,” Bello said. “Customer service is one area that West African restaurants need to improve on,” said Godwin Kodjo, a Ghanaian. “Food is not delivered on time, some of the waiters are too rude for the job, and paying $25 for roasted fish is a little expensive,” said Kodjo along time resident of Prince George’s Country in MD. Paying $25 for a dish is an exception not the norm however.  In West African restaurants where roasted fish is a specialty, prices vary according to the size of the fish. Generally plates go for about $13, 50. That is the price you may pay for a meal of fufu and eru or fufu and okro soup at Come to Africa restaurant or meskerem messob  a mixture of chicken, beef ,lamb and vegetable served at Meskerem restaurant. The Migration Policy Institute reports that in 2012, there were 90,323 foreign born residents in Washinton DC. Of this number,15,555 were from Africa representing 17.2 percent of the foreign born population. A break down by region indicated that 7,881 of the foreign born population was from East Africa. West Africa came next with 4,843 residents, Southern Africa with 1,188 residents ,874 from North Africa and 769 from other unspecified African countries.]]>