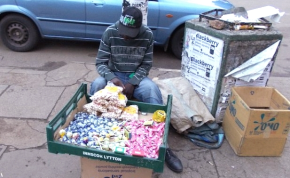 VENDORS selling a new ‘sex coffee’ that allegedly enhances sexual performance are making brisk business on the streets of Harare. The coffee is being sold for between $3 and $5 a sachet, depending on your negotiating skills. Vendors who spoke to NewZimbabwe.com said the coffee helps men maintain an erection for long periods. It also helps them avoid premature ejaculation, they claimed. They said the coffee is taken 15 minutes before the act and gives an individual the stamina to perform for the next 72 hours. The claims could not be independently verified. The vendors are targeting customers at popular joints such as KwaMereki in Warren Park suburb, Zindoga in Waterfalls and KuHuku in Hillside. Vendors who trade at Five Avenues Shopping centre were all in agreement that the coffee works wonders after their husbands took the drinks and they reached orgasms because of the improved performances.

“Mukoma munosiyiwa kumba uku naMaiguru tengai coffe iyi munozouya muchinditenda pano, Amai vanokupai sando dzenyu mukatendwa nemutupo kana muchinge mabata basa,” said Angeline, a vendor. The women who declined to tell NewZimbabwe.Com where they buy the coffee said the demand for the coffee is very high. “During the week I sell from here (Five Avenue Shopping Centre) but at weekends I am based at Mereki and the major advantage is that you can take the coffee either with cold water and any kind of beverage,” said another woman who identified herself as Anna. “My clients include both men and women but women do not usually buy openly as they are shy to do so.” One man who bought the sachets said he was only doing it for a friend who requested that he brings him the product. “No I don’t use these things I am doing a favour for someone,” he said. According to one medical doctor who spoke to NewZimbabwe.Com but declined to be named the problem of erectile dysfunction and premature ejaculation is quite widespread in Zimbabwe. *Source allafrica.com]]>