By the end of 2012, only 6 months from launching, Movitel made total revenue of USD 69.7 million 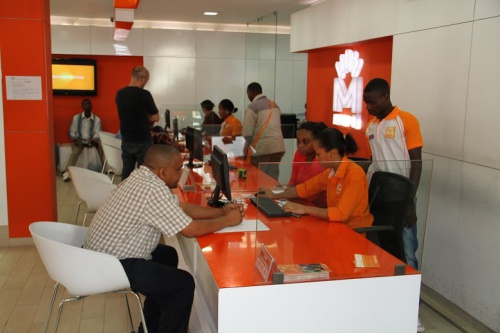 Today at the Gala event of The 11th Annual International Business Awards held at the Westin Vendôme Hotel in Paris, France, Movitel (http://movitel.co.mz/en) – subsidiary of Viettel Group in Mozambique is presented to be the Gold Winner of “Fastest Growing of the Year in Middle-East and Africa” Award. Movitel, SA – joint venture between of Viettel in Mozambiuqe gains its second honorable international prize in the year by winning Golden Globe of “Fastest Growing of the Year in Middle-East and Africa” at the International Business Award 2014. The Award is attributed to Movitel for its outstanding development and achievements in Mozambique and the area. Within only one year, Movitel has increased its coverage area from 60% to 80% and doubled the number of covered people from 35% to 85%. Nearly 600,000 people in at least 5 rural districts in Mozambique have been covered and served telecom services for the first time in life. Movitel has had over 5 million users, taking the leading position in the mobile market. By the end of 2012, only 6 months from launching, Movitel made total revenue of USD 69.7 million. The next year saw significant rise in revenue, USD 154.5 million, of which, USD 102.3 million was recorded in the second half of the year, which was an increase of 65.8% year-on-year. Movitel has improved its successful business strategy as a caring and innovative network for every Mozambican. Especially, Movitel is becoming the favorite operator among the youth and urbanites. The Stevie Awards is the second prize presented to Movitel in 2014 after the first one in July: “Best Mobile Innovation Award”. In 2012, Movitel won the Rural Telecom Award of the AfricaCom Awards. In 2013, it was presented the Competitive Strategy Leadership award by The American Research and Consulting firm Frost and Sullivan. Viettel has been granted telecommunications in 9 countries with total population of over 160 millions, total investment value of USD 1.5 billions. 5 subsidiary companies in Cambodia, Laos, Haiti, Mozambique and Timor have provided services. 2 companies in Peru and Cameroon is going having official launching on October 2014. The other 2 in Burundi and Tanzania are under infrastructure deployment of their networks. Total revenue from overseas business of Viettel reached USD 1 billion in 2013 with around 11.5 million subscribers, bringing in more than USD 180.5 million accumulated profits. *With APO]]>