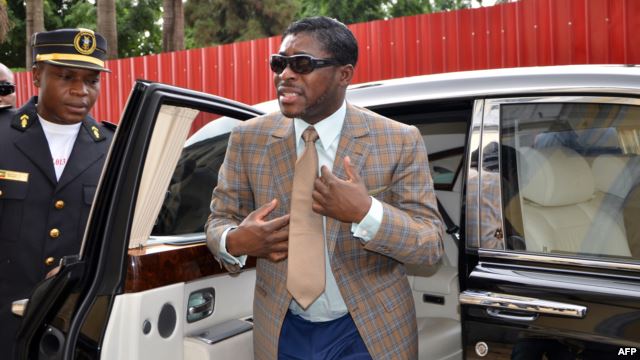 Teodorin Nguema Obiang (R), the son of Equatorial Guinea’s president Teodoro Obiang and the country’s vice president in charge of security and defense, arrives at Malabo’s Cathdral to celebrate his 41st birthday, June 25, 2013.[/caption] Equatorial Guinea’s second vice president Teodorin Nguema Obiang has been ordered by the U.S. Justice Department to sell more than $30 million worth of property it believes was bought using illegally obtained assets from corrupt business deals. The United States Department of Justice said the son of Equatorial Guinea’s President must forfeit his U.S.-based property and belongings, including a mansion in Malibu, California, Michael Jackson memorabilia, and luxury cars, which are believed to have been purchased using money from illegal dealings in his home country. Civil forfeiture The civil forfeiture case, alleging nearly $80 million from proceeds of corruption, was originally brought against Teodorin Nguema Obiang in 2011. Ken Hurwitz is a senior legal officer for anti-corruption at the Open Society Justice Initiative. “It is an extraordinary case in that this is the first case where [it is] a living person whose assets are being seized. So this is historic in that sense,” Hurwitz said. “And it is the first case in the United States … [in which] the attempt is to seize assets that are owned by the current rulers, people who still maintain power in their countries,” he said. Hurwitz said previous cases have all happened years after the person has died or left power, often making it difficult to track down and define the assets allegedly stolen by those individuals. The Obiang family has ruled Equatorial Guinea for more than 30 years.  Despite vast and profitable oil and gas reserves, the World Bank says more than three-quarters of the population lives below the poverty line. Hurwitz said this case also showed how difficult it was to show how this level of corruption occured. “I think there is disappointment that the case will not reach its potential of really exposing in great detail how the corruption works, how money is laundered and how money is stolen from public funds of the country,”Hurwitz said. “And how extortion and self-dealing take place in the country and perhaps most importantly, how the money is laundered, that is to say the role of lawyers and middlemen, bankers and brokers, in assisting to grease the wheels of the accused,” he said. Lavish lifestyle Obiang, who is notorious for his lavish lifestyle and playboy ways, said all the items were purchased using money from legal business deals. The Open Society Justice Initiative said that money from the sale of Obiang’s U.S.-based belongings would be given to charitable organizations to benefit the people of Equatorial Guinea. Under a settlement with the Justice Department, Obiang will get to keep his remaining overseas assets, including Michael Jackson’s famous white crystal glove and a $38.5 million Gulfstream jet, although they could be seized if brought to the United States. *Source VOA]]>