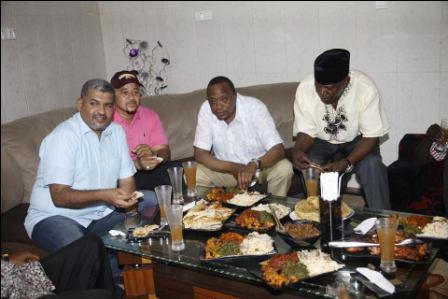 President Uhuru Kenyatta in the company of politician from the coastal city of Mobasa samples the Swahili delicacies at the Barka restaurant during his impromptu visit. Picture by Hussein Abdullahi[/caption] Since the surprise lunchtime visit by President Uhuru Kenyatta on August 30, Barka Restaurant in Mombasa tucked away at the centre of the famous old town has continued the experience a booming business. President Kenyatta who was on an official visit at the Coast that included opening of the Mombasa International Trade Fair, showed up for lunch at Barka Restaurant to the bemusement of the hotel staff and residents. The President popped in at 12.10pm accompanied by a number of local MPs earning the hotel exposure, grabbing social media attention and mainstream media coverage. Among the MPs who joined the Head of State for the sumptuous lunch were Abdulswamad Nassir (Mvita), Masoud Mwahima (Likoni), Gideon Mungaro (Kilifi North) Gonzi Rai (Kinango), Hatib Mwashetani (Lungalunga) and Mustafa Idd (Kilifi South). Since then the restaurant which is located at the heart of the historical Mombasa old town has been frequented by high profile customers including county and national government officials, politicians, lawyers, bankers and even tourists. The outlet’s location is an added advantage as it is within reach of Mombasa County Assembly, Fort Jesus, several law firms, Central Bank of Kenya and a host of other financial institutions. Barka restaurant which is famous for its Swahili dishes with Lamu delicacy is about 1 km from the historical Fort Jesus in Mombasa’s Old Town that was declared a UNESCO Heritage Site in 1997. The old town area is approximately 72 hectares, inhabited by a rich diverse group of communities. Among the popular dishes on offer at the 60 sitting capacity restaurant are biriani, pilau, chapati, chicken tikka, traditional vegetables, simsim bread and mahamri. [caption id="attachment_13058" align="alignright" width="300"] 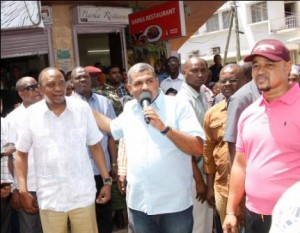 President Kenyatta at the entrance of Barka restaurant acknowledges greetings from the public.
Picture by Hussein Abdullahi[/caption] A spot check by the Kenya News Agency today found that the buzz created by the Presidential visit is yet to die down as the place was a flurry of activity. “The visit by President Kenyatta was a big blessing for us as we have witnessed a new stream of customers to our eatery,” says the hotel’s manager Seyyid Noor Mwenye. Mr Mwenye: “since we opened the restaurant in 2010, we have hosted a number of distinguished customers but not that of the stature of head of state.” He said the President ordered for chicken biriani and a glass of tamarind juice which has since become the favourite dish to most customers. “People come to enquire where the President sat and what delicacies he ordered,” observes the manager. Mr Mwenye noted that since the restaurant was “spotlighted” by the President, they feel “a real new sense of life.” He reckoned that for the President to forsake five star restaurants and beach hotels in this tourist resort city, clearly demonstrated how humble and down to earth he is. He said “ni aghlabu kupata raisi kutangamana na raia wa kawaida tena kwa hotel ndogo kama yetu “(it is rare for a President to mingle with common people and more so in a humble hotel like ours) The uniqueness and ambience of this restaurant is the surrounding historical buildings dating from the 18th century which combines, African, Arabic and European influences. *Source KNA]]>