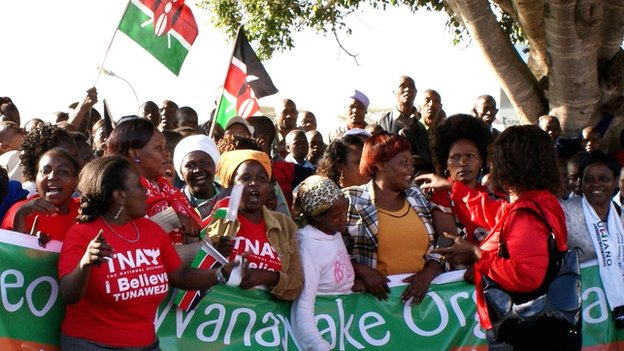 Cheering crowds have welcomed President Uhuru Kenyatta back to Kenya after his appearance at the International Criminal Court (ICC) in The Hague.

Mr Kenyatta attended a hearing at the ICC on Wednesday, becoming the first serving head of state to appear there. He has denied charges of crimes against humanity relating to ethnic violence after the 2007 elections that left some 1,200 dead and 600,000 displaced. Mr Kenyatta was received in Nairobi by dancers and a military guard of honour. At dawn, thousands of his supporters lined the streets leading from the airport to the centre of the city. They waved Kenyan flags and chanted Mr Kenyatta’s name, amid songs declaring his innocence. The president briefly addressed the crowds, standing up through the sunroof of a car, according to the AFP news agency. “We are one and there is nothing to fear because Kenya is stable,” he said. The BBC’s Wanyama Chebusiri in Nairobi says the country’s interior minister had called for large crowds to greet the returning president. However, he says, the celebrations may not necessarily have been orchestrated – the president has a large support base. Packed gallery [caption id="attachment_12751" align="alignright" width="624"] 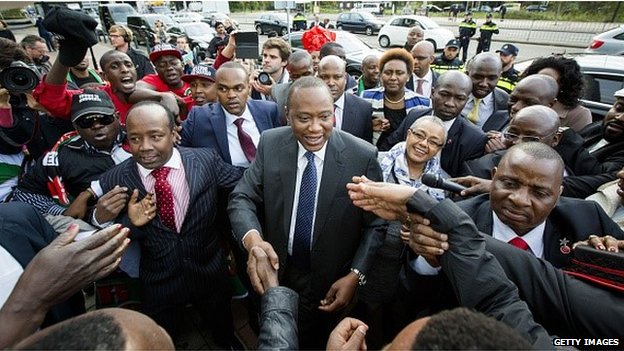 On Wednesday, Uhuru Kenyatta (C) shook hands with supporters outside The Hague court[/caption] Mr Kenyatta was summoned to appear at an ICC “status conference” – a pre-trial hearing – when the prosecution said the evidence needed to go ahead with a trial was being withheld. Around 100 Kenyan politicians flew to The Hague to support the president. Scores of his supporters packed the public gallery on Wednesday. The BBC’s Anna Holligan in The Hague says the case has reached a deadlock, with the prosecution accusing the Kenyan government of withholding vital evidence and the defence saying that without evidence, there should be no trial. The judges must now decide whether to abandon the trial or give the prosecution more time to search for the missing evidence. Mr Kenyatta was elected in 2013, despite facing charges at the ICC. Analysts said he turned the prosecution to his advantage, portraying it as foreign intervention in Kenya’s domestic affairs. He has accused the court of being biased against African leaders. https://www.youtube.com/watch?v=iquHJayNglo Mr Kenyatta faces five charges relating to the ethnic massacres – the worst violence in Kenya since independence in 1963. Tens of thousands of people were displaced and Kenya’s reputation for stability was tarnished. The case was sent to the ICC after Kenya failed to bring the perpetrators to justice. [caption id="attachment_12752" align="alignleft" width="624"] 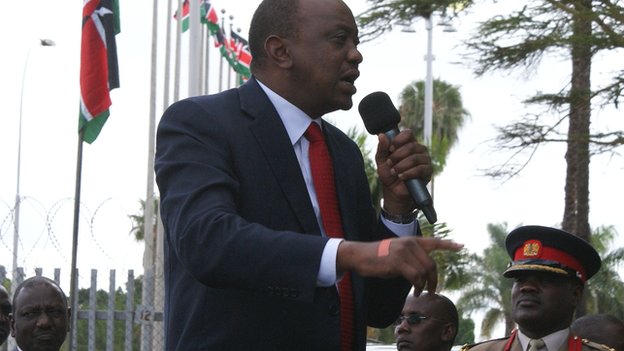 The president addressed the crowds standing up through the sunroof of a car[/caption] Mr Kenyatta was a close ally of President Mwai Kibaki, who was declared the winner of the 2007 election. Mr Kibaki’s rival, Raila Odinga, claimed the poll was marred by fraud. The dispute took on an ethnic dimension, pitting members of the Kikuyu ethnic group of Mr Kenyatta and Mr Kibaki against other communities such as the Luo and Kalenjin. Mr Kenyatta is accused of organising an ethnic Kikuyu gang, the Mungiki sect, to attack rival groups. Deputy President Ruto also faces charges at The Hague, but he was on Mr Odinga’s side during the violence. He also denies the charges. *Source BBC]]>