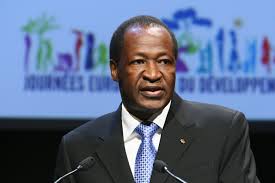 Blaise Compaore is facing unprecedented opposition since the infamous coup and ouster of his friend Thomas Sankara[/caption] As chaos threatens to engulf Burkina Faso with massive demonstrations against plans by President Blaise Compaore to change term limits, the U.S has called for calm, urging parties to debate in a nonviolent, peaceful and inclusive manner. “The United States is concerned by the spirit and intent behind a draft National Assembly bill in Burkina Faso to amend the constitution to allow the term-limited incumbent president to run for an additional five-year term,” said Jen Psaki Spokesperson of the Statement Department in statement issued on October 28. “The United States emphasizes that constitutionally mandated term limits provide an important mechanism to hold heads of state accountable, ensure peaceful and democratic transfers of power, and give new generations the opportunity to compete for political office and elect new leaders,” said Psaki In power for 27 years and barred by constitutional term limits, President Compaore is seeking to force through changes so as to be eligible for the next elections, a move which is facing growing criticism at home and abroad. Although Compaore came to power in 1987 through a coup in which he ousted and killed his close friend Thomas Sankara, term limits were only instituted in 2005. According to AFP, opposition figures fear that dropping term limits will offer Compaore the opportunity to manipulate elections and remain in power for as long as 15 more years. Considered by many as a means of strengthening democratic transitions, a number of leaders in the continent have in the past used questionable  parliamentary majorities to do away with term limits.            ]]>