Dar es Salaam (AFP) – Tanzania will launch construction of a major Chinese-funded sea port in 2015 to boost the trading capacity of the east African nation, a presidential statement read. 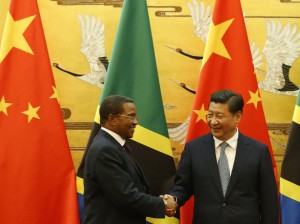 The planned Indian Ocean port at the small town of Bagamoyo is some 75 kilometres (45 miles) north of Tanzania’s economic capital and main port Dar es Salaam.

“We will do whatever is possible to ensure the project is carried out and completed, because of its great economic benefits for the entire country,” Kikwete said in a statement, adding that construction would start in July. Dar es Salaam currently handles over 90 percent of Tanzania’s imports and exports totalling more than 10 million tonnes of cargo a year, according to the African Development Bank (AfDB). But with container traffic expected to grow at more than 10 percent a year and the port already outdated and overstretched according to the AfDB, the new site at Bagamayo is key for expansion and keeping transport costs down. Tanzania has signed deals for the port with China Merchant Holding International and Oman’s State General Reserve Fund. As well as domestic use, Bagamoyo is expected to serve landlocked regional nations including Burundi, the Democratic Republic of Congo, Rwanda, Malawi, Uganda and Zambia. The project is also expected to involve a special economic zone as well as connections to Tanzania’s railway network. The port would rival Mombasa in neighbouring Kenya, currently east Africa’s main marine hub, as well as a planned new port at Lamu, in the northeast. The $24 billion (18 billion euro) Lamu port project, due to be finished by 2030, includes oil pipelines to South Sudan and railways to Ethiopia and Uganda.

The government hopes large gas and coal finds will help grow the economy.

But the government is dogged by allegations of corruption, almost a third of the country lives below the poverty line and foreign aid remains vital.