After months of talks and countless calls to end fighting and prevent famine, leaders appear no closer to ending rift. 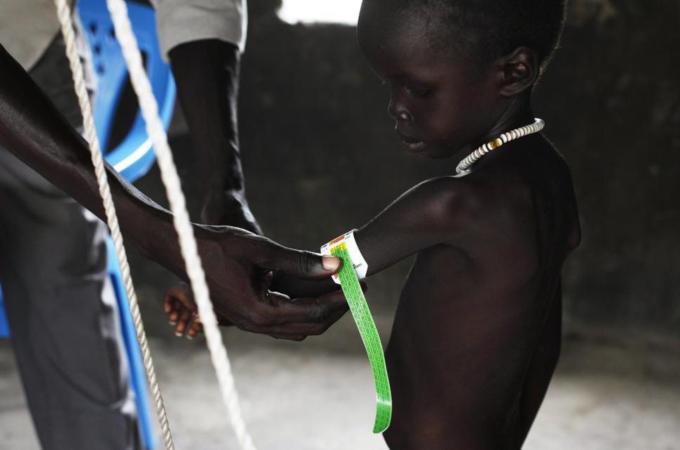 Aid agencies say South Sudan could suffer a famine next year if fighting resumes [Reuters][/caption]Despite repeated threats of sanctions from South Sudan’s neighbors, and warnings about an impending famine, the chances of a lasting settlement to end the conflict in the world’s newest nation appear remote.A schism among the country’s leadership that spiraled nine months ago into ethnic killings and other atrocities shows no sign of healing.With limited strategic direction offered by a divided region and a disheartened, distracted international community, east African mediators are struggling to cajole the nation’s battle-hardened political elite into mending its ways.And it is the country’s people who say they are paying the price. Thousands of people have died in fighting and approximately 1.8 million of South Sudan’s 11 million people are displaced inside and outside the country. Food airdrops have improved conditions, yet aid agencies say that the three war-torn eastern regions of South Sudan – two of which contain oil wells, the country’s economic lifeline – could still suffer a famine next year if fighting resumes when rains subside this month. “Peace cannot come from outside it must come from inside,” Nadia Jarden, a married mother of two who works in a bookshop in South Sudan’s capital Juba, told Al Jazeera. “The region cannot help in bringing peace to South Sudan unless we ourselves are committed to solve our internal war.” Peace talks that adjourned again this weekend in neighbouring Ethiopia involve not only the government and the rebels fighting to unseat them, but also other politicians, civil society representatives and religious leaders. The Intergovernmental Authority on Development, a regional bloc mediating negotiations, says any successful deal has to be forged by a cross-section of society rather than by just the political class – responsible for the current strife and preceding rampant misrule. Those leaders didn’t “create the necessary institutions for effective governance,” Seyoum Mesfin, a former Ethiopian foreign minister leading the peace talks, said in February as he made the case for an inclusive process involving “all stakeholders” to drag the country back from a disaster. “Given the realities of South Sudan, this is not a choice, but a necessity,” Seyoum said. The coup question Delegates at the peace talks in Ethiopia are tasked with hammering out an agreement based on a blueprint for a transitional government and political reform, which was agreed last month. Leaders from regional countries – including Ethiopia, Kenya and Uganda – signed the proposal, as did South Sudan’s President Salva Kiir, one of two powerful men at the very heart of the conflict. The conflict began when tensions at the top of the ruling Sudan People’s Liberation Movement (SPLM) turned violent. Kiir arrested rivals for coup plotting, while others, including Riek Machar – who’d been sacked as vice president in July after announcing his intention to challenge Kiir– fled the capital Juba. The United Nations in South Sudan said in May that the fighting had an ethnic dimension at the outset, with troops from Kiir’s Dinka group accused of targeting Nuer in the capital Juba, including in a massacre of 300 men in one cell. Machar, a Nuer, became the figurehead of the ensuing rebellion as Nuer commanders defected and turned against the army. The senior regime figures who had been arrested – including SPLM Secretary-General Pagan Amum, another man planning to run for president – arrested for plotting a coup were released by Kiir’s administration under foreign pressure. No key player, such as IGAD or the United States, has publicly corroborated the government’s claim there was an attempted coup d’état. Edmund Yakani, who runs the Community Empowerment for Progress Organisation in Juba, says Kiir “mismanaged the internal pressure”, suppressed debate and closed party organs, which “led to this revolution.” IGAD, though, backs the government narrative that Kiir is a legitimate leader who faced an unconstitutional challenge. “Their lack of understanding of it has not given them the chance to put proper and real, concrete, effective pressure on the government,” Yakani said. J Peter Pham, Director of the Africa Center at the Atlantic Council in Washington DC, notes that even within the US State Department, policy has been incoherent. While most South Sudan specialists recognise that Kiir is part of the problem, Washington’s top diplomat, John Kerry, has made strong public displays of support for him, he said. “Until you agree on what’s going on, it’s very difficult to agree on a solution,” Pham said. Negotiations ‘like war’ [caption id="attachment_12747" align="alignleft" width="1000"]

Source: Al Jazeera[/caption] Yet while Kiir is blamed for the disorder in some quarters, he also has important backers – not least Ugandan President Yoweri Museveni, a powerful regional figure. Museveni sent Ugandan troops into South Sudan early in the conflict to protect the government in a move that was apprehensively backed by other east African leaders. While none wanted a rebel takeover of Juba, they feared Uganda’s intervention could prompt its archrival Sudan to retaliate, possibly dragging in Ethiopia and its enemy Eritrea, leading to a regional conflict. Museveni is also influential in the political sphere. An insider account revealed that at the recent IGAD summit he spearheaded the move to amend a power-sharing proposal so Kiir’s powers were left intact. During chaotic proceedings, Machar rejected the deal, which could have left him as a weak prime minister barred from standing in subsequent elections. The parties made no progress on this key issue in the latest round of talks. The tilt towards Kiir complicates the task of IGAD’s mediators as the government is under little pressure to make concessions. Similarly, although Machar has a history of violent rebellion and insurgents loosely allied to him are accused of committing atrocities in recent months – his claim to be fighting a dictatorial regime that’s lost popular support carries weight with some. So while IGAD aspires for the state to be rebuilt in an inclusive process, the problem-creators are integral to a solution, according to Oxford University’s Harry Verhoeven, who teaches African politics and specialises in the Sudans. “Most in the region understand that odious as Riek Machar himself clearly is – given the human rights violations he orchestrated in the 1990s – he does speak for a number of legitimate grievances,” he said. “The negotiators are still facing the same dilemma as at the start of the crisis: power-sharing was the problem to begin with, but by default it’s the only solution.” A crisis ignored Yakani worries even achieving this type of quick fix could be difficult, as Machar demands Kiir’s departure. This is especially so given South Sudan’s heavily centralised state where the president has powers to dismiss legislatures as well as regional governors and judges. Machar wants an “agreement that gives an exit of Salva and gives him no any options of playing around with the exit procedure,” Yakani said. Verhoeven believes a turbulent 50-year history of conflict also plays into the current situation. And even an increasingly exasperated population has not pushed the bickering sides to find a solution. Deng Wal, a secondary school student in Juba, blames all ruling party factions for the strife, but believes another reconciliation is possible. “I think they can work together,” he said. “People split and they still come back together for the sake of peace.” Once the threat of Uganda and Sudan facing off was averted, then an international community exasperated at the continual strife turned its attentions to the other crises on the continent, Ukraine, and the Middle East. Given this context, it’s unlikely the threat of sanctions, an arms embargo, or the clamoring for peace before hundreds of thousands starve to death, will alter the South Sudanese leaders’ calculations, Verhoeven said. “Peace negotiations is a very long game and part of the political struggle for these actors, just like war,” he said. “They don’t consider outside warnings very credible – or even very important.” *Source Al Jazeera .Gabriel Ramadan provided additional reporting from Juba.Follow William Davison on Twitter: @wdavison10
]]>