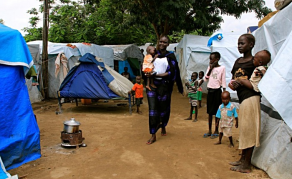 Photo: Mike Pflanz/Gavi/2014
Internally displace.[/caption] Juba — South Sudanese president, Salva Kiir has hinted on possibilities of his country attaining peace within weeks, despite continuous violation of the ceasefire by rebels. The president made these remarks during Wednesday’s meeting with South Africa’s deputy leader, Cyril Ramaphosa. “The South African vice president was given a very important briefing by the president, who assured him of government’s full commitment to bring peace to the country within weeks, if the other side shows the same commitment and readiness to resolve the conflict through peaceful dialogue,” presidential spokesperson, Ateny Wek Ateny told Sudan Tribune. Both leaders reportedly discussed a range of issues, with president Kiir briefing Ramaphosa about the ongoing peace process in Ethiopia mediated by the Intergovernmental Authority on Development (IGAD). Also discussed in relation to the conflict and the peace process was the intra party dialogue, which was facilitated by the Tanzania’s ruling Chama Cha Mapinduzi (CCM) party and what role South African’s ruling party and government could play, Ateny disclosed. The presidential aide said Ramaphosa was visiting the young nation as a special envoy of the South African president, Jacob Zuma. “The vice president of South Africa was as a special envoy of South African president. He came on behalf of President Jacob Zuma with a special message and for a follow up visit on internal party dialogue,” said Ateny. South Africa and Ethiopia reportedly first initiated the intra-party dialogue before CCM party came in and built on their foundation. “So the vice president was coming for follow up and to get briefing from the president on the progress made in the peace process in Bahir Dar where 70% of the contentious issues were discussed and agreed up and the outcome of the intra-party dialogue in Arusha, Tanzania”, said Ateny. JUBA COMMENTS RHETORIC The spokesperson for the SPLM-in-Opposition leader, however, described as mere political rhetoric the statements from the Juba “regime”.

“Such comments which came out from the dictatorial regime in Juba are mere political rhetoric meant to deceive the South Sudanese public and the international community. They are characterized by denials and lack of commitment to end the war which none other than Salva Kiir himself imposed on the people of South Sudan,” James Gatdet Dak told Sudan Tribune. “Salva Kiir was the one who rejected democratic political reforms and processes within the ruling party and government. He refused to convene SPLM political bureau meetings in 2013 simply because some of his colleagues expressed their constitutional right to contest for the chair of the party. Salva Kiir dismissed from the government his colleagues who called for reforms,” he added. Dak also faulted president Kiir for “unconstitutionally” dissolving party the ruling party (SPLM) leadership structures and exempted only his position as chair, which was very strange and that he also introduced violence in his presidential guards on ethnic lines and allegedly oversaw the massacres of 20,000 unarmed Nuer civilians. “The whole crisis is his own making and he should not shy away from taking the full responsibility,” he further explained. GLOBAL PEACE EFFORTS 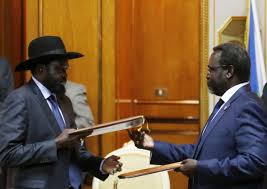 Meanwhile, Ramaphosa said he was in South Sudan as part of ongoing efforts by the international community and African leaders to help create peace and ensure stability in troubled nation. He described as “fruitful” the meeting with President Kiir, saying the latter pledged his full commitment to bring peace into the country. “South Africa has committed itself to working with other regional organizations, particularly the IGAD and the African union, in consolidating peace and stability in South Sudan while addressing humanitarian challenges facing the country,” said Ramaphosa. “It is our wish and hopes to see this country and its leadership find an amicable solution to this conflict as soon as possible so that the people of this county can energies on nation building”, he added. Ramaphosa, also deputy chair of South Africa’s ruling party, will visit Ethiopia for talks with the African Union Commission chairperson, Nkosazana Dlamini-Zuma and later Uganda to meet president Yoweri Museveni. He will also meet Tanzania’s Jakaya Kikwete. Daniel Awet Akot, a member of South Sudan’s ruling party’s (SPLM) political bureau, said its leadership council meeting held last week at commended president Kiir for accepting the intra-party dialogue.
*Source Sudan Tribune/Allafrica
]]>