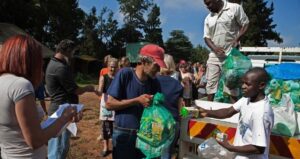 A man receives a monthly supply of food aid donated to residents of a squatter camp for poor white South Africans, at Coronation Park, in Krugersdorp, on March 6 2010. Photo©Finbarr O’Reilly/Reuters[/caption] South Africa’s social grant system, seen as the government’s most direct means of combating poverty, is one of the one of the most expansive of its kind in Africa and the developing world. According to South Africa’s National Treasury, the number of that country’s social grant beneficiaries doubled over the last decade, from around 7.9-million in 2003 to 15.8-million. It is likely to increase by another million over the next few years. In an exclusive interview with The Africa Report, Zoleka Capa, parliament’s chairperson of the social development committee said social grants are an important aspect of delivery, with the government seeking to raise the age limit to 23 from 18. “We have to support the vulnerable and have identified the gaps in the system,” he said. “We are looking at extending the grant to the age of 23 and we are also looking at extending the grant to (expecting) mothers from three months pregnant.” The general sentiment within the ANC is that social grants save lives and should reach more people every year. Social Development minister, Bathabile Dlamini said 16 million South Africans received some form of social security grant from government last year. “Of the total 15,932,473 grant beneficiaries last year, 70 percent received child support grants,” she said. “A total of R39.6bn was paid out on child support grants during 2013/14.” A total of 97 percent of the social development budget goes to the payment of social grants, with the South African Social Security Agency providing grants including old age, war veterans, disability, grant-in-aid, care dependency, foster care and child support. Survival Tanya Abrahams from Mitchell’s Plain on the Cape Flats said the grant is her only means of survival and is helping to feed her child. According to the Treasury’s National Budget Review for 2013/14, spending on social grants accounts for 3 percent of the country’s gross domestic product (GDP) and is projected to rise from R118-billion in 2013/14 to R145-billion by 2016. There were 16 242,196 grant recipients at the end of June, and the cost of providing their benefits up to that date was R29.3bn. Some economists have, however, often warned about the cost of maintaining such a system, questioning whether there is enough money in the fiscus. But social activists argue that this critique is often unfounded. “The appetite for a radical and necessary social assistance net is not likely the cause of the claims of lower economic growth,” said Elroy Paulus from the advocacy group, Black Sash. Paulus told The Africa Report: “The social grant should not be decreased and should in fact be increased and it is in the interest of social cohesion and the government must be bold”. Black Sash said that research shows that social grants are one of the most effective means of reducing absolute poverty. “The sad reality, however, is that this assistance is only provided to children, the disabled and older people. Unemployed and chronically ill people are currently excluded from the social grants system, even when they suffer extreme poverty,” he said. “For their survival they must rely on children and pensioners who receive a grant, as they have no other form of income support.” Some opposition politicians have also sounded concern over the long term sustainability of the southern African country’s social grant system. Liesl van der Merwe, an Inkatha Freedom Party (IFP) member of the parliamentary committee, said she was worried where the money will come from in the future. For now, however, Capa says the grant is necessary to help provide for millions of poor South Africans, like Tanya Abrahams who desperately need the social net. *Source theafricareport]]>