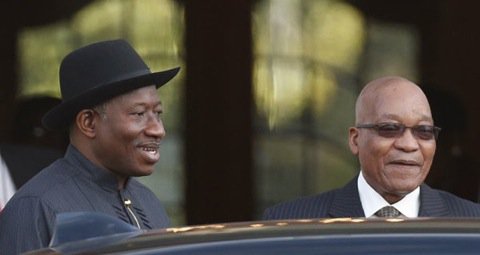 Goodluck Jonathan and Jacob Zuma[/caption] Tensions have risen between Nigeria and South Africa over a second botched arms deal. Nigeria allegedly purchased $5.7 million worth of military hardware through a South African firm but Pretoria froze the money wired to the firm’s account. Local reports say Nigerian President Goodluck Jonathan had called his South African President Jacob Zuma to inform him about the purchase. But South Africa still blocked the deal. The $5.7million was seized by the Asset Forfeiture Unit of the National Prosecuting Authority in the deal, which was burst by the South African National Conventional Arms Control. Nigeria threatened retaliation against major South African companies, including telecom giant MTN. Retaliatory actions could affect bilateral relations between Nigeria and South Africa. Ridicule Three weeks ago, South African customs officials seized $9.3 million in cash stashed in the luggage of two Nigerians and an Israeli. South Africa’s prosecution authority determined that the funds were intended to purchase armaments to be used in Nigeria, and disapproved of the transaction. Some analysts say the blockage was an attempt by South Africa to ridicule Nigeria in the international arena. However, South African ambassador to Nigeria, Lulu Mnguni said the seizure of monies meant for purchase of arms by his country would not affect the existing relationship between Nigeria and South Africa. Nigeria is in the market for arms for its military following findings that Islamic group Boko Haram had superior artillery. In September, Nigerian lawmakers approved a request from Jonathan for a loan of more than $1 billion to fight Boko Haram. Western governments had vetoed arms trade between Nigeria and their major arms manufacturers leading the West African country to seek arms elsewhere, including South Africa. *Source theafricareport]]>