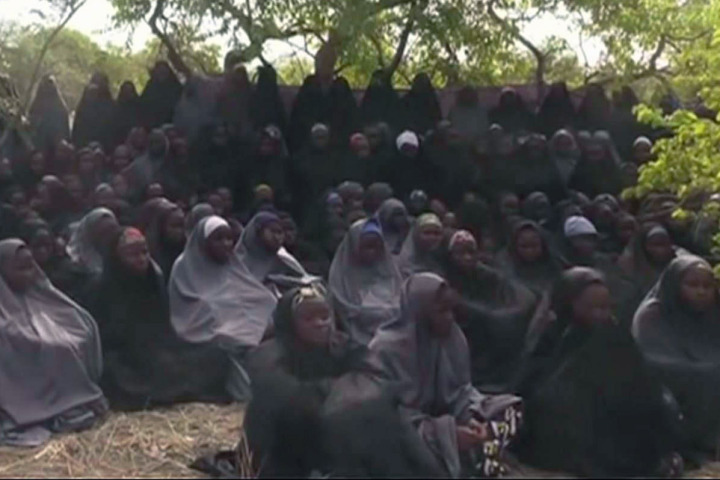 Boko Haram shows off 200 schoolgirls after they were abducted six months ago.
Photo: AP[/caption] Four of the more than 200 Nigerian schoolgirls kidnapped by the militant Islamist sect Boko Haram in Cameroon have escaped, raising hopes for the young prisoners still held captive, according to a report. The free girls, all between ages 16 and 18, escaped with the help of a teenage boy prisoner, who managed to get them out of the camp, according to Stephen Davis, a British-Australian negotiator who had tried to bargain with the extremist Islamic group for the schoolgirls’ freedom. The girls, guided by the setting sun, walked west for three weeks, finally arriving in a Nigerian village, starving and traumatized. “They were amazing — to first escape and then walk for weeks,” Davis told The Times of London. “They are the only ones that have escaped from a Boko Haram camp.” Davis said the girls had been told that if they fled Boko Haram, their families would be killed. Nearly six months have passed since more than 200 girls were snatched from their boarding-school dormitory in northeastern Nigeria by Boko Haram operatives after being awakened by the sound of gunfire. Their abduction sparked global outrage and a huge campaign calling for their rescue, partly propelled by the hashtag #BringBackOurGirls. Even First Lady Michelle Obama issued a tweet holding a sign emblazoned with the hashtag. Davis said several attempts to negotiate their release have fallen through. Advocates have expressed frustration that the world has moved on. “Even before Ebola and ISIS’s intensified activities, most of the world that stood with #BringBackOurGirls had moved on,” Ibrahim Abdullahi, the Nigerian lawyer who started the #BringBackOurGirls campaign, told The Guardian newspaper. “But we here in Nigeria and a few others outside haven’t moved on. We have been persistent. We have been tweeting about it every day. We’re doing a daily one-hour sit out in Abuja and weekly in Lagos.” *Source NYPost
]]>