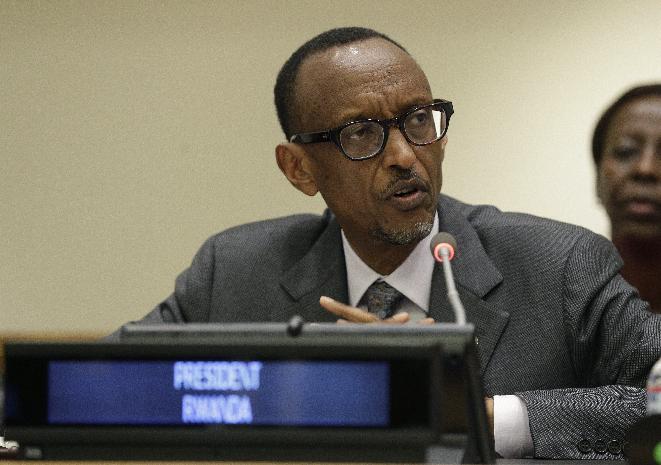 Rwandan President Paul Kagame addresses a High-level Summit on Strengthening International Peace Operations during the 69th session of the United Nations General Assembly at United Nations headquarters on September 26, 2014 (AFP Photo/Andrew Gombert)[/caption] Kigali (AFP) – Rwanda’s president on Tuesday accused the BBC of “genocide denial” after it aired a controversial documentary on the country’s leadership and the mass killings of 1994.

“Rwanda’s Untold Story”, broadcast this month, highlighted growing criticism of President Paul Kagame and revived allegations that his rebel group was behind the shooting down of a plane that sparked the genocide.

The British broadcaster said the programme challenges “the accepted story” of the massacres as well as the portrayal of Kagame as “the man who brought an end to the killing and rescued his country from oblivion”.

But prominent international academics, experts and diplomats have accused the BBC of being “recklessly irresponsible” by allegedly promoting a revisionist account of the genocide in the documentary.

Kagame told parliament on Tuesday that the BBC had chosen to “tarnish Rwandans, dehumanise them”.

He said the BBC would never challenge the accepted history of the genocide in Bosnia or the Holocaust, “but to Africans and Rwandans they do it and then claim freedom of speech”.

An estimated 800,000 people, mostly minority Tutsis, were killed in just 100 days — a rate of killing that was far faster than the Holocaust in World War II.

A spokeswoman said the BBC “strongly refutes” the claim but would not comment specifically on Paul Kagame’s comments.

“The programme sought to handle this in a respectful and measured tone and in no way did it seek to downplay or conceal the horrifying events of 1994 and subsequently,” she said.

The broadcast highlighted growing criticism of Kagame, who despite being credited with overseeing dramatic economic advances while in office has also faced mounting allegations of suppressing dissent and murdering exiled opposition figures.

It also revived allegations that Kagame’s then-RPF rebels were behind the shooting down of the plane of Hutu president Juvenal Habyarimana, the event that marked the start of the genocide of minority Tutsis and their supporters.

Most experts and historians maintain that the plane was most probably shot down by Hutu extremists, and that in any case the genocide had been planned for months previously.

http://www.youtube.com/watch?v=OLiAiPuNX-M The BBC spokeswoman said the network “has a duty to investigate difficult and challenging subjects and we believe the programme is a valuable contribution to the understanding of the tragic history of the country and the region”. A group of 38 commentators — including Canadian Romeo Dallaire, who at the time of the genocide was in charge of the UN peacekeeping force in Rwanda — have already called on the BBC to apologise to genocide victims. In an open letter, the group said that while it was “legitimate” to probe crimes by Kagame’s RPF rebels and “to reflect on the contemporary political situation in Rwanda”, it “should not distort the reality of the 1994 genocide” nor “promote genocide denial”.

They said the BBC’s programme made three “untenable claims”: lying about the true nature of the Hutu Power militia, attempting to minimise the number of Tutsi murdered, and trying to blame the RPF for shooting down president Habyarimana’s plane.