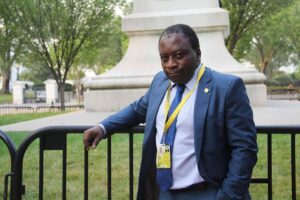 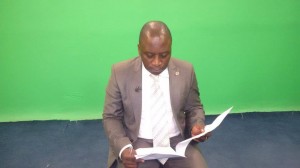 They had been some attacks and beating of journalists before, but it was not as violent as it was in my case. I have the case or examples of Davy Mousa, a journalist working with MNTV and his camerawoman by name Sylvie Ndinga. They were beaten up by the guards of the speaker of National Assembly and the Camera of Sylvie destroyed. Mr. Mousa was even locked up for a day at the Poto-poto Gendarmerie station for two days.  As concerns press freedom in Congo, the press is not free.  The other journalist beaten up by the Police was Giscard Mahoungou of DRTV. Recently a number of print media outlets have been banned. The only newspapers allowed to exist are those that dance to the tune of the state. And as far as the electronic media is concern, the owners of Television and radio stations in Congo are either members of the family of the President of the republic or people gravitating around power circle. In fact there is no freedom of the Press in Congo. In the face of the attacks, when remedies were available to you, is the justice system able to take up the case? I want to defend myself in court, for I have been accused of uttering seditious  comment vis-à-vis the Police and also that, I am working with foreign agents in particular the CIA,  to destabilize the state of Congo. I want them or the Police to bring up proves of their allegations.  The judicial system is what it is but I want to clear my name. Curiously it appears your media outlet is owned by a member of President Sassou’s family, what is its editorial line and how may this have contributed to the attack against your person? Yes, our media group is owned by the elder brother to the President of the Republic. His name is Maurice Nguesso. From the day I began working for them, I told them that, I wanted to be independent and not a propagandist. Our editorial line was or is liberal. I made sure to have balanced opinion. Hence we received both supporters of the majority as well as the opposition. We also carried out investigative  journalism, a thing that was not common in Congolese journalism. I know that, there were some members of the family who were not happy with our openness, but there were equally others who liked the independent spirit. But I don’t think any member of the family ordered the attack other than General Jean Francois Ndenguet who does not like the press or at least the independent Press. How is the media climate in Congo generally ,with private television and radio stations, the government can make the case it has a free press, is the press there free? I think I have already answered this question. The government might say whatever they may want to say, but the truth is that, The Press is not free in Congo. There is a kind of freedom or what I call ‘’cosmetic press freedom’’. President Sassou appears to be nursing plans to run for office again though he is barred by constitutional term limits, is this something that Congolese are in support of? No credible opinion poll has been conducted. But I think the general opinion is that, Sassou Nguesso has so far done a good job in the consolidation of peace and the development of basic infrastructure like roads, hospitals and seaports and some macro economic development. For his long stay power and considering the resources his country has, how much has he done in terms of moving his country forward, economically, socially and politically? At macroeconomic level, Congo has improved with an annual average growth rate of 5%. And the government has embarked recently on massive infrastructural development and a policy to develop the hinterland. The government is constructing airports in all the 9 regions with football stadia.  And there is a project to build 12 general hospital at the tune of cfa frs 1 thousand billion. But the rate of poverty has not reduced and corruption and nepotism are rife. On the political and social aspects, the situation is tense because, it is not open. The opposition is not allowed to express itself on the national media and even on the private media. The only media where they could express themselves was MNTV and there is a lot of intimidation.  There is also a risk for social uprising. What did the attack do to the morale of Elie Smith vis a vis his profession as a journalist?  Well, it really had an impact. But after some days, it instead buoyed my determination to continue my job, for I know, it is risky especially when you want to work professionally.          ]]>