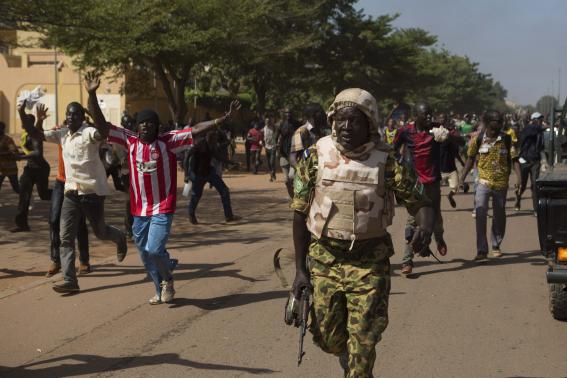 A soldier runs from anti-government protesters as they take over the parliament building in Ouagadougou, capital of Burkina Faso, October 30, 2014.
CREDIT: REUTERS/JOE PENNEY[/caption] Thousands of protesters marched on Burkina Faso’s presidential palace after burning the parliament building and ransacking state television offices on Thursday, forcing President Blaise Compaore to scrap a plan to extend his 27-year rule. Emergency services said at least three protesters were shot dead and several others wounded by security forces when the crowd tried to storm the home of Compaore’s brother. Security forces also fired live rounds and tear gas at protesters near the presidency in the Ouaga 2000 neighborhood. Black smoke swirled in the air above parliament after demonstrators lit fires inside the building before looting computers and televisions screens and wheeling away police motor-bikes, a Reuters reporter said. Lawmakers had been due to vote on Thursday on a government plan to change the constitution to allow Compaore – who took power in a coup in 1987 – to stand for re-election next year, when he was due to stand down. Alain Edouard Traore, communications minister, later said the government had dropped the proposal to amend a two-term limit on the presidential mandate. [caption id="attachment_13527" align="alignright" width="567"] 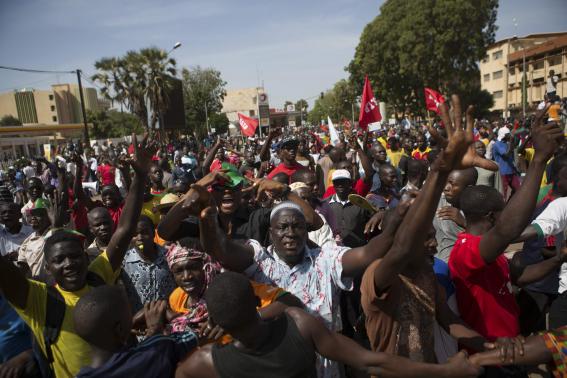 People march against Burkina Faso President Blaise Compaore’s plan to change the constitution to stay in power in Ouagadougou, capital of Burkina Faso, October 29, 2014.
CREDIT: REUTERS/JOE PENNEY[/caption] But protesters told Reuters they would not stop until Compaore was forced to step aside. Burkinabe officials said there were also large-scale protests in Bobo Dioulasso, Burkina’s second biggest town, and Ouahigouya, to the north. “We did this because Blaise was trying to stay too long. We are tired of him,” said Seydou Kabre, a protester in the crowd in Ouagadougou. “We want a change. He must go!” Most deputies had not yet arrived for the vote when protesters, who had set up barricades outside parliament from early on Thursday, stormed the building. The crowd surged forward after police fired warning shots in the air. A Reuters reporter saw nearby structures also on fire and vehicles outside the parliament being smashed. State television was forced off the air after the building was taken. Soldiers deployed outside state radio with an armored personnel carrier to defend it from the crowd. Opposition leader Zephirin Diabre said on his Twitter feed he was opposed to any coup in Burkina Faso just hours after he had urged armed forces to join the people in a speech broadcast live from his headquarters.   http://www.youtube.com/watch?v=bawot1vr8Cg     Local radio and a diplomatic source said opposition leaders held talks with an influential army General Kouame Lougue about a possible transition. The same diplomatic source said members of Compaore’s government had been arrested at the airport trying to leave the country. [caption id="attachment_13531" align="alignleft" width="567"] 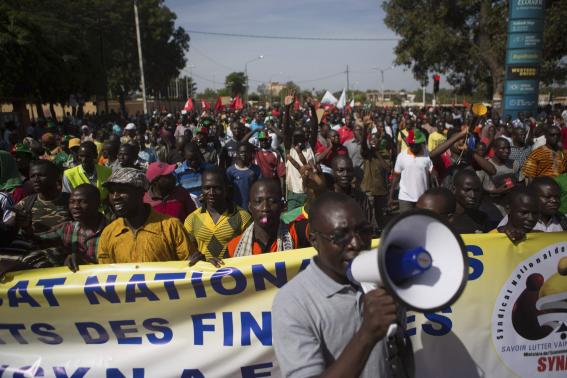 People march against Burkina Faso President Blaise Compaore’s plan to change the constitution to stay in power in Ouagadougou, capital of Burkina Faso, October 29, 2014.
CREDIT: REUTERS/JOE PENNEY[/caption] A Reuters witness said protesters took one of the dead bodies from the streets and wrapped it in the national flag, while softly singing Burkina’s anthem. They then drove it to the central Place de la Nation, where more protesters had gathered. INCREASING OPPOSITION Compaore has ruled the cotton and gold-producing nation with a firm grip but, in recent years, he has faced increasing criticism, including from within his own camp and the military. “If needs be we are going to march to the presidency. We want Blaise Compaore to leave, We want change,” said George Sawadogo, a 23-year-old student. Opposition to Compaore’s plan have been mounting in recent days. Hundreds of thousands of people took to the streets of Ouagadougou and other towns across the country on Tuesday in what the opposition said was the start of a campaign of civil disobedience over the proposed constitutional reform. The government has called for restraint. [caption id="attachment_13532" align="alignright" width="567"] 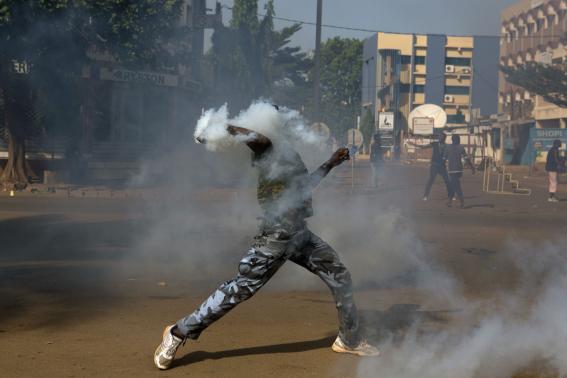 An anti-government protester throws a tear gas canister at riot police in Ouagadougou, capital of Burkina Faso, October 30, 2014.
CREDIT: REUTERS/JOE PENNEY[/caption] “This seems to have moved us to a situation where Compaore will have to leave power before the end of his term next year,” said Gilles Yabi, an independent West Africa analyst. “It will depend on how the security forces react, but I can’t imagine that Blaise will be able to finish his term if there is serious violence today.” France has called on Compaore to adhere to African Union rules preventing constitutional changes that allow leaders to stay in power. The U.S. government has said it is concerned. “All bets are off now,” said one Western diplomat in Ouagadougou, who asked not to be identified. *Source Reuters]]>