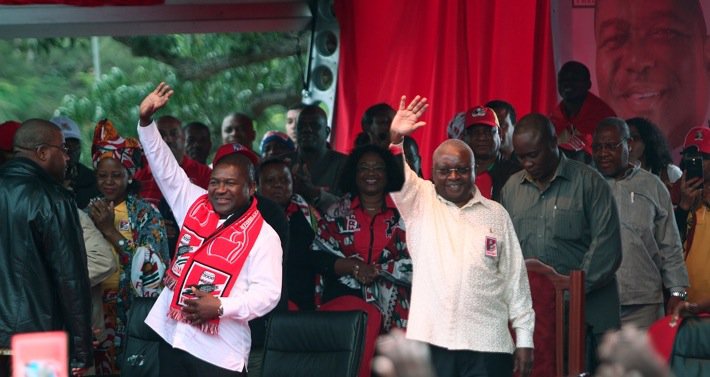 FILIPE NYUSSI, PRESIDENT OF MOZAMBIQUE. PHOTO©SERGIO COSTA/AFP[/caption] In Mozambique the ruling party’s relatively unknown presidential candidate won the October elections without much surprise. So far in politics, he has played tough with the opposition and toed the party line. The rise of Filipe Nyussi as the presidential candidate of the ruling Frente de Libertação de Moçambique (FRELIMO) party in national elections on 15 October augured an historic change for the country. Nyussi, who won a bitter succession battle in March, is the country’s first northern president after decades of southern domination. Backed by FRELIMO’s formidable election machinery, he took 61.7% of the vote. Nyussi is a low-profile figure close to out-going president Armando Guebuza, who will step down after his two terms. Aged 55 and representing a generational succession for FRELIMO as the first leader that did not fight in the country’s civil war from 1977 to 1992, Nyussi has strong connections to the party’s liberation aristocracy. Both of his parents were FRELIMO members during the war for independence and he was raised in exile in Tanzania. Educated in Czechoslovakia as an engineer, he pursued a career in the state port and rail company, Caminhos de Ferro de Moçambique (CFM). He had not held a political office before being nominated defence minister in 2008. He first joined the party’s central committee in 2012 and is not yet a member of its political commission, its highest decision-making body. His lack of stature increases the party’s power over the presidency. It also underlines that Guebuza, who remains party president, will continue to wield great influence. Lacking political experience, Nyussi will remain dependent on Guebuza’s networks for advice and direction. There are few signs of independent thinking from Nyussi. He appears to represent the party’s dominant outlook on critical issues including democratic governance, relations with state institutions, the opposition and economic development, all of which are closely rooted in the party’s traditions of primacy, entitlement and statism. Nyussi’s unremarkable public comments to date have largely referred to existing official priorities and commitments. In preparation for stepping out on the world stage, Nyussi made a tour of regional capitals in Southern Africa and participated on 1 August in a London conference hosted by Chatham House think tank. He has little resonance with the public and his selection came about through his appeal to the party. He was chosen over runner-up Luisa Diogo, who had strong public support at the time of the leadership contest – 42% versus 2% for Nyussi. Nyussi’s ultimate objectives are unknown. As a northerner, he may be more open to addressing regional and ethnic concerns, and be better suited to deal with the opposition, although, as defence minister, he has taken a hard-line with the Resistência Nacional Moçambicana (RENAMO) party and its insurgency. Appearing alongside Guebuza at a rally in July, Nyussi said: “Peace is me. Peace is… not waiting in the bush for people to pass in order to kill them so that I can be president.” He is associated with and damaged by the failed attempt to find a military solution to the insurgency. This led to tough talk from the government after the two parties signed a ceasefire in September. As a weak presidential figure, he is likely to be less able to restrain the business interests of party barons who have complained of the Guebuza faction and family’s extra-political dealings. One of the biggest winners from his victory is Alberto Chipande, a FRELIMO grandee and fellow Makonde, the northern ethnic group traditionally allied to FRELIMO. *Source  The Africa Report]]>