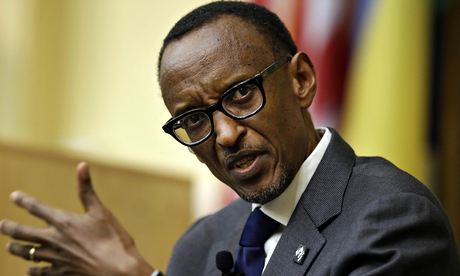 Paul Kagame speaks at Tufts University near Boston. Photograph: Steven Senne/AP[/caption] Paul Kagame, the president of Rwanda, has been criticised after hinting that he could extend his rule beyond 2017, which would require changing the constitution. Rwandan presidents are limited to two seven-year terms, but there have been growing calls in state-controlled media for Kagame to be allowed to stay on for a third. “I think at some point we need to leave countries and people to decide their own affairs,” Kagame told students and faculty staff after a speech at Tufts University near Boston, in the US. “Why I’m saying that is because I’m asked when and whether I plan to leave office – right from the start of my first political term in office. It is as if I am here just to leave. I’m here to do business on behalf of Rwandans.” He added: “I don’t know what else I can give you on that, but let’s wait and see what happens as we go. Whatever will happen, we’ll have an explanation.” Kagame came to power in 2000 after leading the Rwandan Patriotic Front to overthrow the extremist Hutu government behind the 1994 genocide. He won elections in 2003 and 2010 with overwhelming majorities. He used to brush off speculation that he could seek to stay on for another term, but in recent years he has become more equivocal on the subject. He would hardly be the first African leader to have term limits removed: in neighbouring Uganda, President Yoweri Museveni, who has held power since 1986, had limits removed in 2005 so that he could run for office the next year. Rwandan opposition politicians and watchdogs condemned the prospect of Kagame staying on. Frank Habineza, president of the Democratic Green party of Rwanda, said: “We’re very concerned because over the years he has said he will respect the constitution. For him to stay on, the constitution would have to be changed by referendum and we are against that. It will not be good for the country and will outdo some of the positive things he had done.” He added: “We agree that he has done some good work but there are some areas where the country has not done well, for example in the democratic sphere. We think it will be better if he retires. Twenty years after the genocide, we need another kind of leader, not a military one.” Carina Tertsakian, a senior researcher at Human Rights Watch, said: “Rwanda has a constitution which the president and everyone else should be respecting. If he or the government tries to change the constitution, it will go against any semblance of democracy in Rwanda. But then again, there is no democracy in Rwanda. It’s a one-party state, as we’ve seen at the last election. “If President Kagame wanted to have a positive legacy for his country and Africa as a whole, he could step down gracefully when his term ends, unlike other leaders in the region who have overstayed their welcome.” Kagame is one of Afriac’s most polarising figures. He has been praised for overseeing rapid growth in the Rwandan economy and marked improvements in health and education, but criticised for persecuting opponents and journalists and closing political space. Last month South Africa expelled three Rwandan envoys and accused them of being linked to attacks on dissidents in the country. Rwanda denied the accusations. Kagame is touring universities around Boston to speak about Rwanda’s recovery from the genocide 20 years ago this month, in which 800,000 people were killed. He believes European powers played a role in triggering the mass slaughter, and that the international community failed to intervene to stop it. “What we learned is that people must be responsible for their own fate,” Kagame told the Tufts audience. “If you wait for outsiders you will just perish.” He accused the international community of destabilising the neighbouring Democratic Republic of the Congo by allowing perpetrators of the Rwandan genocide to escape into the vast country. *Source theguardian]]>